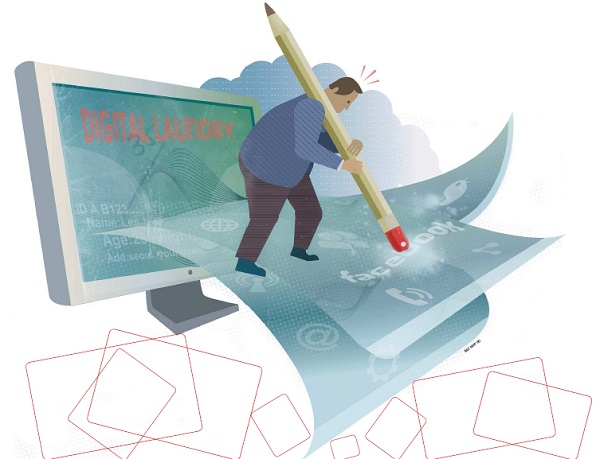 The boy had found himself being threatened by an anonymous woman.

“I got a message from a person I didn’t know through Skype the other day,” he explained. “She showed me her breasts and then she said she wants some photos of mine. So I took photos of myself and sent them to her. And then she sent me a link and said it is a link to an app in which we can video chat while naked.

“After I downloaded the app, I realized it was an APK file. Through the file, she came to have a full access to the phone numbers of my family and friends. She has been asking me for money with my photos since then.” 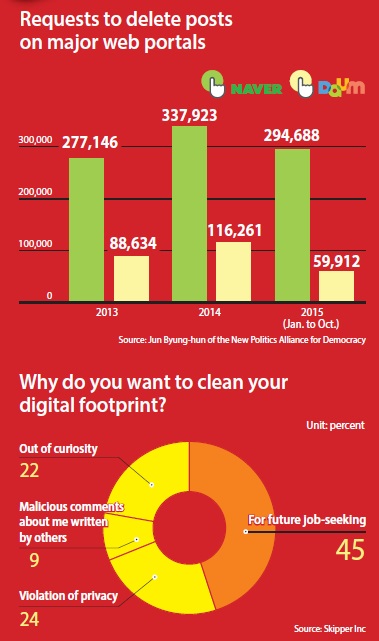 Santa Cruise soon uploaded an answer to the post, giving the boy guidance on how to handle the situation.

“In such cases, teenagers need to say that they are students and they don’t have any money,” said Kim Ho-jin, the head of Santa Cruise Company. “Such photos, especially ones of male teenagers, are not marketable. Thus, [the scammers] easily give up if they think they can’t get money with the photos and find their next targets.”

Kim started his company as a modeling agency about 20 years ago but went into the business of digital laundry service a few years back, when most people didn’t know what the term meant. Digital laundry is the work of removing online information.

Back in 2008, Kim asked web portals to remove some malicious online comments about one of the company’s child models, and that was his first foray into digital laundry service.

After that, companies, celebrities and individuals began to knock on the door of Santa Cruise in hopes of getting rid of traces of their past lives or deleting negative comments associated with their names. Santa Cruise works with local web portals like Naver and Daum that host message boards as well as with local file-sharing services like Webhard. According to Kim, many users share lewd videos and photos via Webhard. The service has also reached out to overseas companies.

“We have explained about some extreme cases and asked foreign services, such as Tumblr and Facebook, to give us access to teenager-related photos and videos, but haven’t heard from them yet,” Kim said.

In one case Kim heard about, a teenage girl committed suicide after her boyfriend leaked a naked photo of her. In response, Kim began to provide a free deletion service to teenagers.

When asked why he offers his services free of charge to teenagers, Kim said, “You can’t turn down their requests when you hear their stories. A single comment or video can destroy one’s life forever.”

But even though there is no monetary fee for teens who flood the site with their requests, there are still a few strings attached.

The company requires a certificate for 10 hours of volunteer work for deleting online postings, comments and photos and 20 hours of charitable work for getting rid of videos, so that only the truly desperate request the service.

“We want them feel a sense of responsibility, too,” Kim said.

In today’s digitally connected era, it’s not surprising that Kim’s main customers are teenagers and people in their 20s and 30s, the most active users of social media. While the minimum cost of digital laundry starts from 500,000 won ($412), it sometimes costs more than 10 million won depending on the total amount of data that needs to be deleted.

With the rise of social media, Kim has seen the digital laundry sector expand to around 10 or so companies in recent years.

Lee Choong-woo, the head of Skipper Inc., which provides a similar service to Santa Cruise, said, “The number of companies which specialize in digital laundry began to surge between 2014 and 2015, but the competition is kind of slowing down and the market is entering a steady state.”

Both Kim and Lee said most of their individual customers want to delete sexual photos and videos from the Internet. The second most common request from customers is to erase online posts that contain private information or comments that reflect their views on religion, society and politics.

Skipper ran a survey of its customers in 2014 and found that 45 percent of respondents said they were concerned that their old posts and comments may prevent them from landing jobs.

Many of Kim’s teenage customers also wanted to use the digital laundry service for the sake of their future careers.

Some of them said they want to become singers or actors, while others said they hope to work in politics but are concerned about their digital footprint because of some bad precedents.

Previously a singer named Taeyong, who is a trainee at SM Entertainment, came under fire for cheating users of the country’s largest second-hand goods website.

The singer reportedly uploaded posts on the online marketplace saying he would like to sell Gundam action figures, but after receiving the money he did not send the product to the buyer or sent defective action figures.

SM officially apologized for Taeyong’s misdeeds in December 2014, and the singer hopeful is still in training.

The issue of digital laundry rose to the surface in 2014 alongside the debate over the right to be forgotten, and it is still a controversial topic.

Some see the service as a way for people to cover up their ungraceful pasts while depriving others of the right to be informed.

But Kim of Santa Cruise says the right to be forgotten is desperately needed, at least for teenagers.

Lee of Skipper Inc. is also concerned about teenagers, who carelessly leave details of their lives on Facebook and other forms of social media.

“I see extreme cases that happen to teenagers,” Lee said. “Teenagers are in need of guidance from parents when using SNS.”

He continued, “They are so ignorant about the nature of SNS. Many of them consider Twitter as if it were smartphone text messages but it is not. You’re talking to the world through Twitter.

“They need to know their photos and comments stay forever, and they may cause problems when they grow up. And one tip for you is never ever delete your account when you want to erase your digital footprint. It makes things worse and more complicated,” Lee added.

Kim of Santa Cruise also has some words of advice for teenagers, who are often have their sexual photos and videos leaked.

“Life is long and love is short,” he said. “You may destroy yourself the moment you capture intimate moments [of you and your loved one]. Once you capture it, you may think of taking your own lives for the rest of your life.”

With an increasing number of people paying attention to their digital presence, some venture companies have launched smartphone messengers that have functions that enable users to delete messages.

One of them is Dontalk, launched in October 2013. The smartphone messenger destroys a message a few seconds after it’s received. The app also sends a message back to the user when the recipient tries to capture the message or a picture to save or reproduce it.

“We successfully launched the service years ago thanks to people who care about their privacy online,” said Gu Song-yi, head of service planning department at Brinicle, which developed Dontalk.

Other smartphone messengers such as Snapchat and Shot.ly offer services similar to Dontalk.