Korean robot among guests at the annual Davos forum

Korean robot among guests at the annual Davos forum 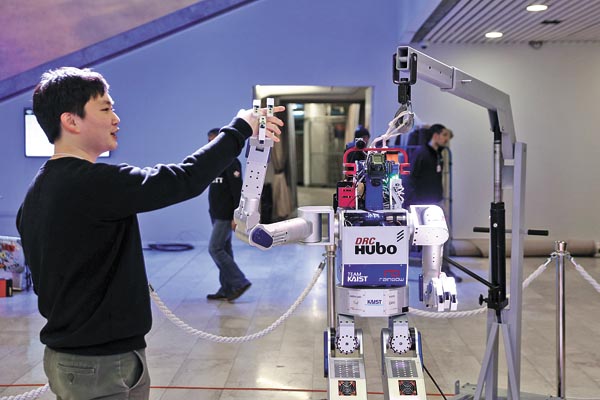 A technician demonstrates a Korean-made DRC HUBO robot in the Congress Center conference hall in preparation for the start of the World Economic Forum in Davos, Switzerland, on Monday. [BLOOMBERG]

First there was Davos Man and then Davos Woman. Get ready for Davos Robot.

Facebook’s Sheryl Sandberg, JPMorgan Chase’s Jamie Dimon and Alibaba’s Jack Ma will share the spotlight with a prize-winning Korean robot called HUBO at the annual meeting of the World Economic Forum this week in the Swiss ski resort.

The adult-sized automaton, which can climb stairs and enter and exit a car, will be a star attraction at the conference. It illustrates a looming challenge for the 2,500 elite delegates: How to protect their companies and jobs by harnessing advances in artificial intelligence and robotics, without exacerbating the economic frustration and populist discord spreading around the globe.

“If some of the predictions about tech and employment come true, then we should all be worried,” said Alan Winfield, a professor specializing in robotics at the University of the West of England, who will be speaking in Davos. “There need to be solutions.”

Jostling with robots for the attention of the assembled executives, bankers, politicians and economists will be the slowdown in China and resulting tremors in financial markets, the renewed burst of geopolitical tensions from North Korea to Saudi Arabia and Europe’s migration crisis, and the U.S. presidential ambitions of Donald Trump.

All will shape conversations in the fabled Belvedere Hotel and other venues, which over the past four decades have become the focal point of the world economy one week every January. Stardust will be spread by the likes of Leonardo DiCaprio, Kevin Spacey and will.i.am.

About 20 sessions during the four-day conference are devoted to the official theme of “The Fourth Industrial Revolution,” a catch-all term for rapid technological progress.

Occupying what organizers have called the “Robot Space” will be a showcase of HUBO, which was developed at the Korea Advanced Institute of Science and Technology. The robot last year scooped up a $2 million prize for beating 22 international rivals in a competition sponsored by the U.S. Department of Defense.

Other discussions betray anxiety as well as wonder. There are panels on what happens when robots go to war, potentially replacing “both soldiers and generals,” and whether innovation “is failing the middle class” by eliminating jobs. Bloomberg