Revolving door in duty-free is challenged

Revolving door in duty-free is challenged 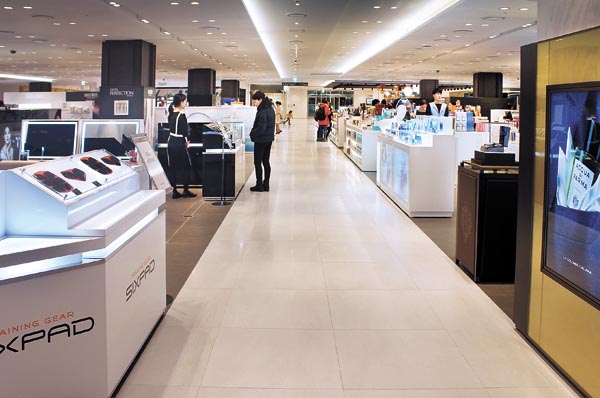 Only a few customers are spotted at Galleria Duty Free 63 in Yeouido, western Seoul, on Jan. 16, less than three weeks after it opened. The new store is struggling to attract top luxury brands. [PARK EUN-JEE]

Ever since Lotte Duty Free was stripped of a license to run a duty-free shop at Lotte World Mall in Jamsil, southern Seoul, last November, everything has been in flux for Kim Hee-kyung, a 35-year-old employee of the soon-to-close outlet.

She moved her family to the Jamsil area last June to reduce her commute. But the fate of the store’s workers hangs in the balance due to its imminent closure set for June.

The duty-free operator promised to keep workers from the Lotte World Mall by dispatching them to other Lotte retail units, but that generous offer doesn’t address a more fundamental gripe held by staffers like Kim.

“The costs related to a relocation are a secondary issue,” Kim said. “The underlying problem is that workers at such stores live in constant insecurity because their employer has to bid for a license every five years. This leads to tremendous frustration associated with uncertainties.”

In 2013, the Korea Customs Service mandated that each duty-free operator’s license be subject to a tender process every five years regardless of the performance of shops, in an effort to increase competitiveness of the industry. Prior to that, licenses were automatically renewed every 10 years if no severe problems in management occurred.

“Even if we move to other duty-free shops, they will be reapplying for their licenses as well,” Kim said, “It not only concerns me, but the whole family. The biggest concern for me is my daughter, who will have to change her kindergarten and make new friends.”

Lotte Duty Free and SK Networks, which operates the Walkerhill Duty Free store, were among the first groups to lose their licenses after the change went into effect last year. Combined, the two stores employ some 2,200 people.

The new regulation has been blamed as excessive government intervention in the industry and a guarantee of inefficiency and inevitable layoffs. 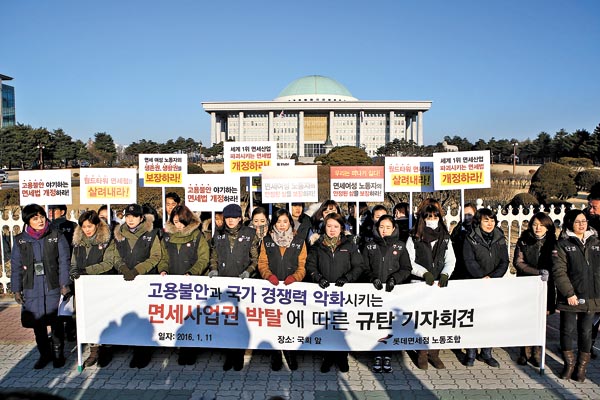 The labor union of Lotte Duty Free stages a protest on Dec. 11 at the National Assembly to demand changes to duty-free regulations that force operators to bid for licenses every five years. [LOTTE DUTY FREE]

Lotte Duty Free’s labor union staged a protest on Jan. 11 to call for a change to the five-year regulation. Over 30 members gathered in front of the National Assembly.

“The Lotte World Tower Duty Free was managed without a major problem and generated healthy sales,” said Moon Geun-sook, head of the union. “It is hard to understand why the store should be forced to close.”

“The 300 billion won [$248.6 million] investment spent on the property is now also wasted because of the decision,” said Moon.

But she stressed that the primary issue concerns job insecurity and inconveniences for workers.

“It’s not an issue for the workers at the Lotte World Tower store alone,” she said, “The licenses for the COEX and Gimpo International Airport shops will soon expire. Our workers feel as if we have become five-year contract workers.”

SK Networks is on the verge of being pushed out of the duty-free industry altogether. The Walkerhill Duty Free is its only duty-free shop, and it has been operating for 24 years.

SK Networks recently invested 100 billion won to refurbish its property. Its most urgent issue now is clearing its inventory by the Feb. 16 closing date.

To speed that up, the company is offering up to 80 percent discounts for employees of SK affiliates.

An electronic board is positioned at the entrance of the duty-free shop to show the current discounts. Luxury brands such as MaxMara and ETRO are marked down as much as 80 percent while Moschino, Bally and Camper are offered with up to 70 percent off.

Imported cosmetics brands are selling at a 30 percent discount and it is rare for them to be included in a sales event.

“Popular products already sold out in December,” said a worker at the store. “After the sales event was announced, we saw a big influx of customers, both tourists and local people.”

But selling products below market prices will translate into lower profit margins for SK Networks, though it’s better than getting stuck with unsold inventories.

Some rare good news came recently as Doosan Group, the new duty-free operator, is in talks to acquire shipping centers and duty-free facilities.

The machinery and construction conglomerate is also negotiating with SK to hire some of its duty-free workers.

“While we are on track to close the shop, we’ve made efforts to minimize the losses,” said a representative of SK Networks.

The frequent changes in licenses could pose challenges for operators to offer luxury designer brands. Top brands such as Louis Vuitton, Hermes and Chanel - the so-called big three in duty-free business - are known for being picky about choosing their stores.

Those brands are careful about expansion to retain their premium image. They choose high-end department stores and experienced duty-free shops rather than new players.

Compounding the issue is the luxury labels’ shift in business strategy to reduce physical presence and boost their appeal online.

And since new duty-free operators are required to open their stores within six months of winning the license, they may not have enough time to negotiate with the high-end brands.

It could be the same for Doosan and Shinsegae, the two operators that defeated Lotte Duty Free and SK Networks in November.

Analysts think the change in the regulation has dragged the companies into a more complicated and costly battle rather than increasing competitiveness.

“Weaken that platform and you will get retailers focusing on the short term, cutting key areas such as staff and in-store merchandising,” he said in an interview with local media outlets.