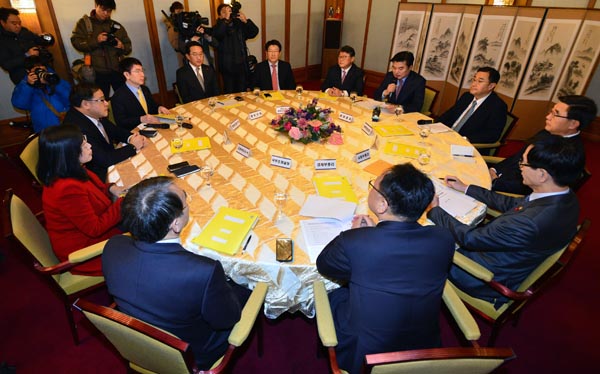 The ruling party has taken an unconventional step to revise the law governing the operation of the National Assembly in order to resolve the ongoing deadlock over a series of economic bills.

Following a series of embarrassing melees in the legislature, the ruling and opposition parties in 2012 amended the National Assembly Act, which engineers the need for compromise into the parliamentary process.

A bill can only be put up for a vote when three-fifths of lawmakers, or 180, consent to it.

While the revised act has significantly reduced violence in the legislature over the past four years, bills sponsored by the government and the ruling party, which commands 156 seats in the 300-seat legislature, were often blocked by the opposition.

And with less than three months left before the next legislative election, a frustrated Saenuri Party is now attempting to once again change the rules of the game. On Jan. 11, Rep. Kweon Seong-dong sponsored a revision to the National Assembly Act to allow a bill to be directly sent to a vote when requested by the majority of sitting lawmakers.

The Saenuri Party on Monday presided over a meeting of the National Assembly Steering Committee with only its own lawmakers present to table Kweon’s proposal. The party subsequently and intentionally discarded the bill shortly after it was tabled.

The move aimed at sending the revision directly for a vote. Article 87 of the National Assembly Act states that any bill that has been determined by a committee as unnecessary to be referred to the plenary session can be repealed when at least 30 lawmakers request it within seven days. The ruling party plans to gather 30 lawmakers within the week and send the discarded revision to the main session.

The main opposition Minjoo Party has strongly condemned the Saenuri Party’s move to use that loophole. “The ruling party always talks about serious negotiations, but it provokes us from behind,” said Rep. Lee Jong-kul, the floor leader of the Minjoo Party. “It’s like a violent backstabbing from a movie.”

The vote, however, still requires the approval from National Assembly Speaker Chun Ui-hwa. Although the ruling party can send the revision to the National Assembly Act to a voting session, it’s now up to Chung to actually allow a vote.

Chung on Tuesday responded critically to the Saenuri’s use of the loophole. “I have no comment,” he said, “but I think we must not commit any more wrongdoings to correct a wrongful law.”

The ruling party said Tuesday as controversy grew that its decision was intended to restore majority rule in democracy.