In life as in politics, clothes often make the man

In life as in politics, clothes often make the man

One of the state-run institutions I set up after the May 16 revolution [coup] in 1961 was the Center for the People’s Reconstruction of the Nation. I established it with the aim to put in place a project to modernize the country.

One of the legacies of the center under my leadership was a brand of work apparel.

The outfit was simple - loose-fitting trousers and a button-up shirt with four front pockets - and tailored in a way to maximize efficiency. It later became the uniform for all government workers, and President Park Chung Hee and I enjoyed wearing them in our free time. 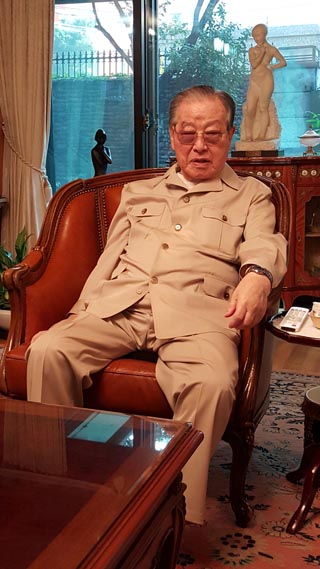 Kim Jong-pil recalls his days as a politician, when he preferred to wear his own official state uniform, which he had designed some 40 years ago, during an interview with the JoongAng Ilbo on Dec. 17, at his house. [JOONGANG PHOTO]

It epitomized the spirit of the 1960’s, when the government was trying to motivate the people to work harder for the good of the nation ? though it has since become a relic of history.

To this day, I still like to wear it. With four pockets on the shirt, it allows for flexible movement.

When I was named prime minister in 1971, the official dress code was a formal suit. But when I went on field inspections, I always wore the outfit I had designed.

When I was reappointed as prime minister in 1998, under the Kim Dae-jung government, I also took this special-purpose garment out of my closet and wore it on inspections. I have it in five different colors.

When my wife Young-ok, who passed away last year, saw me in my signature uniform, she would often teasingly ask: “Are you trying to look like Chang Kai-shek?”

Among the global statesmen known for their unique taste in fashion, British Prime Minister Winston Churchill stands out for his signature one-piece siren suit, which he personally designed in the 1930s.

Famous for being easy to slip on and off, it later became a hallmark of Churchill’s peculiar character.

Another well-known national leader who had a unique fashion sense was French national hero President Charles de Gaulle, who enjoyed wearing his military uniforms from World War II, when he led the French resistance against Nazi occupation.

His uniform, which he also proudly wore on official occasions, represented the pride and honor he had as a national leader and the love he felt for France.

When I have to choose a formal suit, I insist it be black. Only a handful times have I chosen a different color. I also prefer to wear crisp white shirts, without stripes. I like to blend well with the suit, which is why I usually wear a black jacket with a white shirt.

I remember my wife complaining in an interview that I was very stubborn when it came to dress code.

I also always preferred a necktie that could go well with a suit. I’ve noticed that many politicians like neckties with colorful stripes, thinking it makes them more visible to the public. But I’ve often seen this tendency as a sign of their lack of inner strength.

In a nod to my dress code, I was ranked in 1995 as one of the top 10 most well-dressed politicians by the association of Korean dressmakers.

Among politicians known to dress well, I remember the late politician Park Tae-joon for his classic and stylish outfits. Between Kim Young-sam and Kim Dae-jung, two political archrivals, the former Kim came out ahead of the latter in terms of fashion sense.

Kim Young-sam cared about his appearance when he was in his 20s. To make up for his short stature, he preferred shoes with high soles, which he paired with long pants. Kim Dae-jung, on the other hand, liked wearing red neckties, thinking it made him look younger.

In the run-up to the 1997 presidential race, when I campaigned for the late Kim Dae-jung, I wore a blue shirt with a red necktie for a televised debate upon the recommendation of the campaign media team, which insisted I would look reinvigorated.

Nevertheless, I felt awkward, especially because over my entire political career, I never would have chosen something like that.

Former President Park Chung Hee’s clothes were always proper and neat. He would often wear an outfit selected by first lady Yook Young-soo, who usually recommended a gray suit with a modest necktie.

But though Park was short like Kim Young-sam, he did not like high-soled shoes. Reflecting his modest tendencies, he often preferred to wear a plain suit.

I believe the way a person dresses reflects his or her personality and principles, as well as his or her political and social beliefs.

The most immediate way politicians can connect with their voters is through their sense of style, which is why they must be prudent.

No matter how lavish a statesman dresses, if he lacks inner strength, such dress will only make obvious his inability to represent the people. What matters most is what is in a man’s heart.

Unfortunately, I don’t know many politicians who put the people’s interests before their own. People say politics is an art form. So I hope the politicians today can emerge well-dressed as well as full of integrity.