Cold spell is set to last into Monday

Cold spell is set to last into Monday 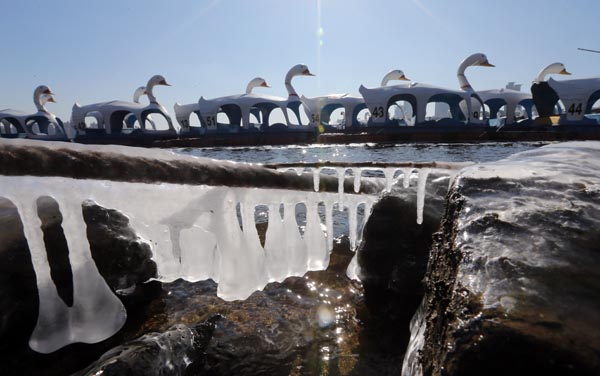 Some parts of the Han River froze on Tuesday, which was recorded as the coldest day so far this winter season. [KANG JUNG-HYUN]

The Korea Meteorological Administration forecast Tuesday that the nationwide cold spell will persist until Monday, culminating on Sunday.

The weather agency issued cold spell warnings in most of the nation - Seoul, Incheon, the Chungcheong region, Gangwon and the northern part of Gyeonggi.

The frigid weather, with heavy snowfall and strong winds, forced delays and cancellations for ferries and flight routes. Due to harsh weather, six Jeju bound flights were canceled and 60 flights were delayed.

On Monday, a 60-year-old man died from hypothermia while climbing Mount Seorak, and two other hikers were barely rescued. The Korea National Park Service on Tuesday imposed an entry ban into most of Korea’s national parks, including those to Mount Seorak, Mount Odae and Mount Chiak, due to heavy snow and extreme cold.

Slippery snow-covered roads caused one reported traffic accident on Honam Expressway; and 25 vehicles were involved in a pile-up around 12:48 p.m. on Tuesday near the Jeongeup Rest Area in the Seoul-bound lanes of Honam Expressway, between Jeongeup IC, North Jeolla, and Taean IC, South Chungcheong. One person was critically wounded and two slightly injured.