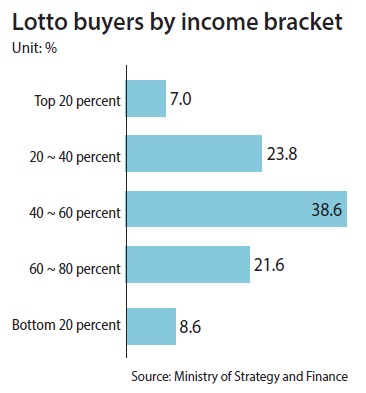 One out of two Koreans have bought a lottery ticket in the past year, a survey by a government agency showed Wednesday.

The Korea Lottery Commission, under the Ministry of Strategy and Finance, announced that 56.5 percent of 1,000 Korean adults said they had bought a ticket in the past year, a 2.8 percentage point increase year-on-year.

The survey was conducted in November.

Among the respondents who did buy lottery tickets, the average purchasing frequency was 14.2 times per year, or once every four weeks. The frequency rose slightly, from 13.4 times in 2014.

By income, people in the 40 to 60 percent bracket accounted for the largest share of lottery ticket purchasers at 38.6 percent, the survey showed.

When asked about their feelings towards the lottery, 68.1 percent of the respondents said they enjoy buying tickets, which was the highest percentage since the commission started surveying.

“People’s recognition about lotteries is improving showing higher percentages than a year before,” said the commission in a report. “More people have a positive perception of lotteries.”

People in their 40s, especially males, were particularly enthusiastic about lotteries, the commission said.

More Koreans feel more negatively about of stocks rather than the lottery, the survey also showed.

When it comes to getting rich quick, the survey showed that most think their best option is the casino (88.9 percent), followed by horse racing (83.5 percent) and stocks (23.6 percent).

“Many people noticed that the lottery fund is being used for public donation projects,” the commission said. “We hope lotteries continue to develop as a healthy leisure program.”