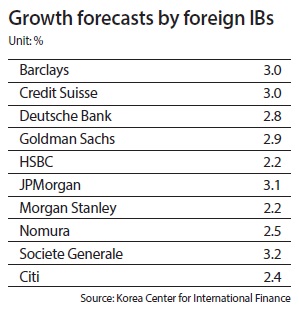 As financial institutions lowered their growth forecasts for the Korean economy on Wednesday, the government’s prospects for 3.1 percent growth are looking bleaker.

According to the Korea Center for International Finance (KCIF), numerous foreign investment banks said 3 percent growth for Korea this year won’t be possible due to the continuing global slowdown aggravating conditions for Korean exports, a key growth driver.

There was even more skepticism after the announcement that China grew 6.9 percent in 2015, marking the weakest expansion since 1990.

Standard Chartered Bank cited slowing exports as a major reason for less than 3 percent growth for the Korean economy.

“Korea’s exports appear to be in trouble,” said Park Chong-hoon, head of Korea economic research at Standard Chartered based in Seoul. “We see a risk of losing growth momentum in 2016 as government support for domestic consumption fades and exports remain weak.”

Exports fell by an average 7.4 percent year on year from January to November 2015 and by 15.9 percent in October - the largest fall since the global financial crisis, the Standard Chartered report pointed out.

“The export sector accounts for more than 50 percent of Korea’s GDP, and its recovery is critical to sustainable growth,” Park said. “We believe Korea cannot sustain its resilience in the event of a prolonged deterioration in exports. A balance between the domestic and external sectors is key to further growth.”

But prospects for the domestic sector are not bright either. Citi expressed concerns about the domestic market’s growth, as government efforts to boost consumption, including the individual consumption tax cut and discount events, ended last year.

“Due to the government’s efforts to boost consumption, which ended last year, the economy will face a consumption cliff, while business sentiment could contract due to ongoing corporate restructuring and financial woes,” Citi was quoted as saying by the KCIF.

According to the KCIF, the average growth forecast for the Korean economy in 2016 by 10 foreign investment banks is 2.73 percent, far lower than the 3 percent prediction by the Bank of Korea (BOK) and 3.1 percent by the Ministry of Strategy and Finance.

Korea’s new finance minister, Yoo Il-ho, stuck to the government’s goal, saying it was possible to achieve 3.1 percent growth even without a supplementary budget.

The International Monetary Fund released an adjustment to its global economic forecast on Tuesday, cutting its growth projection for 2016 from 3.6 percent to 3.4 percent. For emerging economies, the fund lowered its forecast from 4.5 percent to 4.3 percent.

But the Korean government wants to defend its 3 percent goal to prevent the economy from going into prolonged low growth.

Some institutions expect the BOK to make cuts in the benchmark interest rate once or twice this year, taking the lead in boosting the economy.

Goldman Sachs and Citi say the BOK would have to lower the key rate to get close to its inflation target of 2 percent. BNP Paribas says the central bank could cut the rate twice before June.