Koreans get ever more keen on their daily coffee

Koreans get ever more keen on their daily coffee 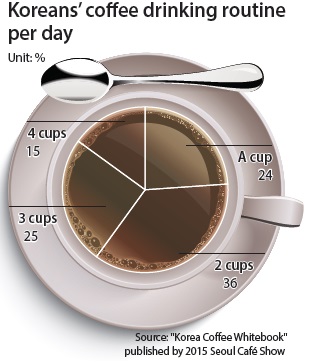 Koreans are increasingly interested in coffee, with many learning fancy brewing methods to use at home, or spending big at cafes.

Nearly eight out of 10 Korean adults drink at least two cups of coffee a day and seven brew their own at home, according to a white paper from the Seoul Cafe Show 2015 published Wednesday.

Its poll of some 1,076 visitors on their daily coffee-consumption habits showed that 36 percent drink two cups, 25 percent take three and 15 percent opt for four or more a day. Twenty-four percent said they drink a single cup a day.

Asked about what determines their choice of cafe, 61 percent of the respondents cited the taste of the coffee. Only 20 percent named price, followed by location at 13 percent and other things to eat at 5 percent.

“Making coffee at home is not a fad but has become a key trend that will dominate the coffee industry throughout this year,” said the white paper.

Many of those home brewers have professional knowledge about coffee, with some 80 percent saying they had been trained in coffee-making techniques like pulling espresso or making a pourover cup.

Three percent answered they have been certified by the Coffee Quality Institute, based in Long Beach, California, despite not being in a coffee-related industry.

Starbucks Coffee was the most favored coffee shop in Korea, named by 47 percent, trailed by Ediya Coffee at 11 percent, Holly’s at 6 percent, and Coffee Bean & Tea Leaf at 5 percent.

Six out of 10 respondents named Americanos as their most preferred coffee drink, whereas 24 percent said they favored lattes.

With coffee’s increasing popularity, the number of new franchised cafes has spiked in recent years, totaling 12,022 in 2014, up 42.2 percent from a year earlier, according to the Statistics Korea. Coffee shops showed fastest growth in number of stores compared to other franchise businesses.