Pacquiao hopes to take his last punch in April

Pacquiao hopes to take his last punch in April 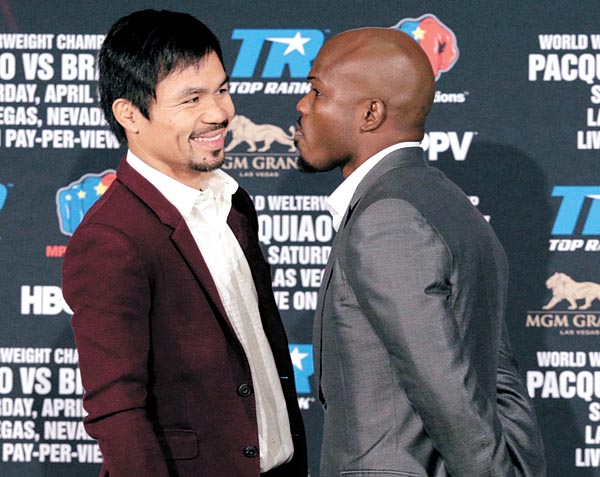 Manny Pacquiao and Timothy Bradley Jr. pose at a news conference in Beverly Hills, California, on Tuesday. They will fight on April 9 in Las Vegas. [AP/NEWSIS]

BEVERLY HILLS, California - With a beatific politician’s smile on his face, Manny Pacquiao calmly insisted he’ll step out of a boxing ring for the final time on April 9 after his third fight with Timothy Bradley.

After all, the eight-division champion has a senatorial campaign to plan and a loving family to please. The 37-year-old Filipino phenomenon quietly claims the spring is a good time to take his last punch.

“I’m so happy hanging up my gloves after this fight,” Pacquiao said Tuesday. “I’m sure I’ll feel sad after that, but that’s life. It’s time, I think.”

That note of uncertainty is familiar to Pacquiao’s promoter, Bob Arum. After a half-century in the fight game, the Top Rank boss knows a boxer’s word on retirement is hardly ever the last one.

“I will not promote it as Manny’s last fight,” Arum said. “He says he’s going to retire, and maybe he will. The truth is that you never know with any boxer, but I haven’t known Manny to say things he doesn’t mean. But we all realize this could be the last time he fights.”

Nearly nine months after he failed to hurt Floyd Mayweather Jr. in the most lucrative fight in boxing history, Pacquiao is back stateside to promote his grand finale. His camp insists Pacquiao is recovered from shoulder surgery required to repair a rotator cuff injury that affected the Mayweather bout, and he’ll be ready for a full training camp with Freddie Roach.

Pacquiao realizes that if he looks impressive in beating Bradley, he could stoke interest in a healthy rematch with Mayweather, who retired last fall. Even after their anticlimactic first meeting, a second bout would be another enormous financial windfall for the two biggest stars in boxing.

“[Mayweather] retired already, so I’m going to retire also after this fight,” Pacquiao said. “I never regret. In fact, I thought I won the fight. A lot of people, my fans, believe I won the fight. ... I know [it’s time to retire] because after this, I have another big responsibility in the Philippines, which is serving the people. My family wanted me to retire before I fought Mayweather. I started this boxing just to help my mother, and I’ll end my boxing career to help the country.”

Pacquiao will face Bradley at the MGM Grand Garden Arena in Las Vegas, completing a trilogy between two of the world’s top welterweights. Bradley won a hotly disputed split decision over Pacquiao in their first meeting in June 2012, but Pacquiao earned a unanimous decision victory in the April 2014 rematch.

Pacquiao is certain he won the first fight, and his opinion is shared by Roach and Arum, who promotes both fighters. Bradley believes he won the rematch, a position shared by fewer observers.

With a guaranteed $20 million payday, Pacquiao happily agreed to take on Bradley for a third time.

He claims the reasons weren’t just financial: Pacquiao believes Bradley “has changed” since their last two fights, and he wants to see how he’ll do against the revamped version of an already tenacious opponent.

“I heard Manny Pacquiao chose me because he knows me,” Bradley said. “I think I’m different now, I honestly do. I think this fight will be different than the first two altercations we had.” AP