Mercedes-Benz vows to focus on service centers in 2016

Mercedes-Benz vows to focus on service centers in 2016 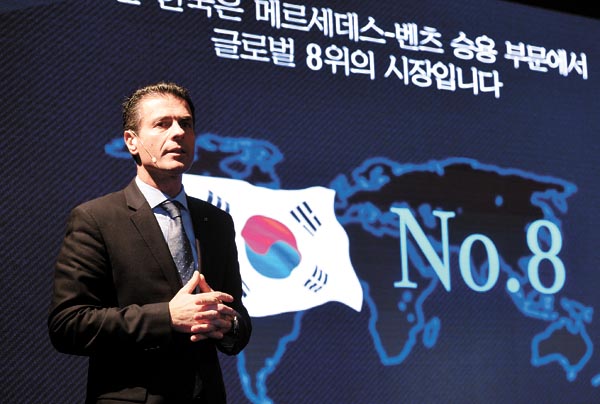 Mercedes-Benz Korea (MBK) said Wednesday its top priority for this year is beefing up the automaker’s network of service centers across the country.

Unveiling the company’s annual business goals before reporters in a press conference at the Hotel Shilla in central Seoul, MBK CEO Dimitris Psillakis first pointed to the automaker’s improvements in sales.

The automaker sold more cars in Korea last year than ever before, 46,994 units, up 33.5 percent from 2014, according to the Korea Automobile Importers Distributors Association (Kaida).

“The growth rate was the highest among three German premium brands [Benz, BMW and Volkswagen] and was also higher than the [imported] market’s average of 24.2 percent. Korea became the world’s eighth-largest sedan market for Benz,” he said.

In order to keep sales strong, Psillakis announced that the company would expand its network of service centers in Korea. During the presentation, the company cued a live video chat from its newest and largest center, the Jukjeon Service Center in Yongin, southern Seoul, which operates 46 work bays.

“We will aim to provide services in accordance with customers’ preferences,” said Vice President Kim Ji-seop, speaking from the Jukjeon center. “In the past, many of our services were one-way communications during which employees simply read what we had done to a customers’ car while looking at computer screen, but we will try to communicate more, probably using tablet PCs, to give more transparent explanations to customers and offer as many details on the service process as we can.”

The expanded efforts could be in response to a string of complaints by Koreans about the after-sales services of foreign automakers - including the so-called “breaking Benz” incident last year, where a customer, dissatisfied with what he felt was MBK’s poor customer service, smashed up his 209 million won ($177,000) S63 AMG in Gwangju with a golf club.

MBK will open eight new service centers to operate a total of 48 by the end of the year, which would give them a total of 753 work bays, a 47 percent rise from 2014. In order to ensure better quality of service, the company planned to increase manpower at its dealerships by 23 percent, or from the current 2,940 to 3,600 by the end of the year, while also hiring 30 additional MBK employees to total 200.

The company also said its dealers agreed to invest 190 billion won through 2016 to beef up service infrastructure.

Psillakis did not give specific numbers when reporters asked about this year’s sales goal, but didn’t hide his confidence in the imported car market.

“Kaida predicted that the Korean imported car market will grow by 8.5 percent this year from last year and we expect MBK to grow more than the market average,” he said.

The company said it will roll out 11 new cars including the 10th-generation E-Class sedan and new GLC SUV, the successor to the GLK.

“It will be a year of SUVs for Mercedes-Benz Korea,” said Choi Duk-jun, vice president of sales. “The GLE and GLC are set to roll with some hundreds of orders piled up, and the GLE Coupe will hit the market in the second half.”

MBK said it will also try to engage with the Korean community more, as the automaker has been criticized for lack of charitable giving. The company’s biggest rival, BMW Korea, donated about 4 billion won to charity in 2014, which is twice Benz’s 2 billion won.

“There are different approaches to contributing to Korean society,” said Psillakis. “One is investments, things like opening employee training centers, which eventually helps in creating more jobs for young. More than 1,500 new jobs were created.”