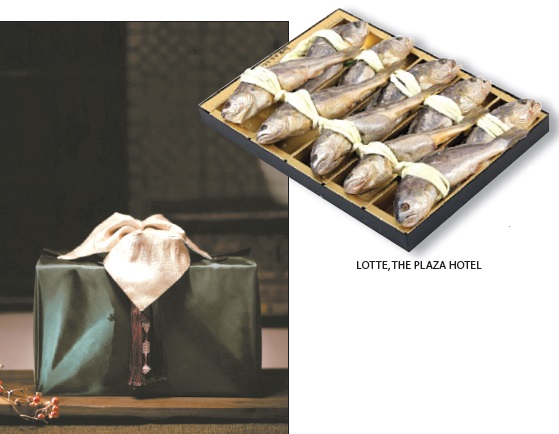 A set of 10 yellow corvinas, above, and vintage wine set, left, both cost 3.5 million won (2,900 dollars). The two are among the most expensive Lunar New Year gift sets. [LOTTE, THE PLAZA HOTEL]

Ahead of the Lunar New Year holiday, or Seollal, retailers are going all out to market their gift-set bundles to both high-rolling and frugal shoppers.

While many consumers are looking for mid- to low-cost practical gift sets amid the economic downturn, premium sets that offer luxury limited-edition products are also popular despite their high price tag.

According to Lotte Department Store on Monday, presale revenue on holiday gifts from Dec. 21 to Jan. 10 was up 52.9 percent year on year. The growth was led by practical gift sets priced at less than 100,000 won.

However, after the main sales period began, demand for premium sets continuously increased. For retailers, this means having to cater to customers on both the low and high end.

In response, Lotte Department Store first expanded its stock of practical gift sets by more than 15 percent compared to last year. It added more than 20 percent to its wine supply in the 30,000 to 50,000 won price range.

Hyundai Department Store saw the same trend in sales, with low- and high-end gift sets both equally on the rise. Gift sets of canned foods, seasonings and desserts below the 100,000 won price range showed an 18.7 percent year-on-year increase in sales revenue. At the same time, sales of Korean-beef gifts sets over 500,000 won increased 12.3 percent year on year.

Discount chains such as Emart have also seen growth in popularity of gift sets in the lowest and highest price ranges.

However, sets in between the premium and practical categories, which range between 20,000 won and 30,000 won, recorded a loss of 8.6 percent compared to the previous year. 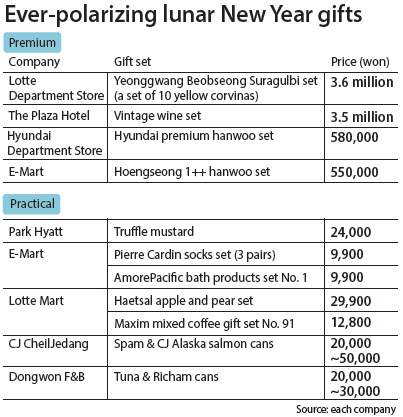 Such a large range in consumer preference has called for manufacturing companies to adjust their focus toward dual targets. For example, Donwon F&B, a canned food supplier, made two types of gifts sets with its tuna and ham cans, one between 20,000 won and 30,000 won and the other over 50,000 won.

The hotel industry is jazzing up their high-end gift sets by providing unique experiences.

The Westin Chosun Seoul is offering a “home curating service,” in which an interior decorator goes to the home or office of a customer to help curate art pieces from a gift set provided exclusively by the hotel. Over 3 million won worth of artwork by artists Lee Wal-chong and Lee Su-dong are part of the set.

The Plaza Hotel is offering sets of wine and food specially selected by the hotel’s sommelier and chef, along with direct packaging and delivery by employees of the hotel.

Differentiated delivery service is a big keyword for this year’s holiday season, with major retailers including hotels competing to provide more personal and meaningful delivery systems.

“Delivery problems in the holiday season can cause critical discontent,” said an industry insider. “Since delivery loads for this Seollal season is expected to mount, customer satisfaction may largely depend on the quality of each retailer’s delivery system.”