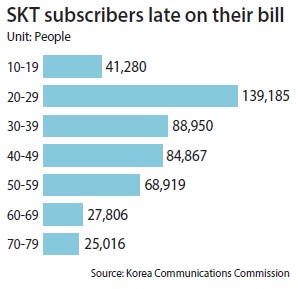 Top wireless carrier SK Telecom has come under fire for handing over information about subscribers with unpaid bills to credit rating companies.

Those subscribers have been subsequently registered as defaulters by the companies, which negatively affects their credit ratings, according to Rep. Kim Jong-hoon of the Saenuri Party on Tuesday.

The lawmaker accused the telecommunications provider of being too harsh, given that SKT is the only carrier that has been punishing delinquent subscribers in such a manner.

Still, SKT’s actions are legally valid since the law says those who have failed to make a payment worth 100,000 won ($82) or more for four months can be considered a defaulter.

Rep. Kim said that SKT reported a total of 67,356 members between 2012 and 2015, based on data released by Financial Supervisory Service. Each subscriber’s unpaid bill is over 1 million won and has been overdue at least a year.

Of those subscribers, 11,492 people actually saw their credit scores drop.

Rivals KT and LG U+ used to do the same thing, but stopped in 2010 after lawmakers called the reporting excessive at a National Assembly audit.

Since then, the two players have reported delinquent subscribers to the Korea Association for ICT Promotion, and have also limited services to subscribers with long-overdue bills.

Following the revelation, SKT said that it will stop giving the data to credit rating companies.

“We will stop sending the information, considering the unfavorable economic conditions and high youth unemployment rate,” the company said in a statement.

The company also said it would retract the information it had already provided.

Of the delinquent customers, most were twenty-somethings, at 139,185 subscribers with a total 51.2 billion won in overdue bills, followed by those in their 30s at 88,950 subscribers. Delinquent subscribers in their 40s totaled 84,867 and their bills amounted to 8 billion won, according to data by the Korea Communications Commission.

The company said that it will improve its notifications for late payers instead of reporting them to credit rating companies.

“We will try to prevent overdue cases by tracking and monitoring subscribers who make huge amounts of small payments charged to their smartphone and game players who often buy virtual items,” the company said.