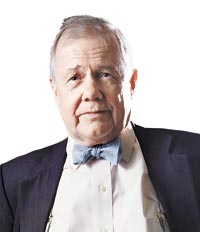 Legendary investor and financial expert Jim Rogers has taken up an adviser post at Fount, a Korean start-up specializing in investment algorithm development, the company said on Wednesday.

“Rogers visited Korea in December to discuss management strategies with us,” a Fount executive told the JoongAng Ilbo.

His new role at Fount comes as the Financial Services Commission, a top watchdog, made public on Monday its plan to introduce a robo-adviser system, which the company is keen on developing. A robo-adviser is an online wealth management service that provides automated, algorithm-based portfolio management advice without the help of human financial planners.

Fount aims to differentiate itself from existing companies by automatically recommending product portfolios based on customers’ asset size and investment tendencies. It has developed an algorithm that enables diversified investments across domestic financial products as well as stocks, bonds, real estate and raw materials across the globe. The company will begin operations in April after a beta test starting in February.

What led Rogers, whose investment advice is highly coveted, to a Korean start-up that hasn’t even launched was his love of motorcycles.

In his best-selling memoir “Investment Biker,” Rogers chronicles a 22-month investing trip he took around the world in 1990 by motorcycle. In New York in 2006, Rogers met Fount founder Kim Young-bin, who at the time, as an undergraduate student, was also traveling around 21 countries to publicize the disputed Dokdo islets issue.

After graduating from university, Kim joined Boston Consulting Group and jumped on the start-up bandwagon, foreseeing rosy prospects for robo-advisers.

Rogers, who co-founded the Quantum Fund with financier George Soros, has been a speaker at various forums and seminars in Korea in the past decade and has gained attention recently for his upbeat outlook on North Korea as an investment destination.

Now based in Singapore, the 74-year-old has said many times that he would “put all [his] money into North Korea” if he could, comparing it to the Chinese market in the 1980s.