Even the ancients needed a handy times table

Even the ancients needed a handy times table 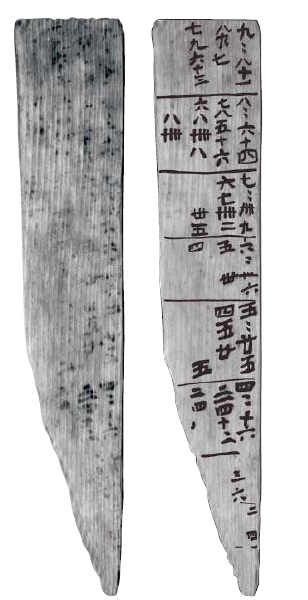 Korean archaeologists found what appears to be the country’s oldest artifact bearing a mathematical multiplication table.

The Korea Cultural Heritage Foundation announced Wednesday that a 30-centimeter-long (11.8-inch-long) sword-shaped wooden stick found in an archaeological exploration in Ssangbuk-ri in Buyeo, South Chungcheong, in 2011 included parts of a times table.

The Ssangbuk-ri site was where Korea’s Baekje Kingdom (18 B.C. to A.D. 600) had government offices, and the Korea Cultural Heritage Foundation conducted an excavation between June and October of 2011. Recently experts in various academic fields came to the conclusion that the writing is a multiplication table.

The writing is faded but an infrared test found that the numbers are written in Chinese characters. (The photo on the left is the artifact. The photo on the right shows it with the writing restored.) The stick is made of pine. Wooden sticks were used as writing materials in ancient Korea before paper became accessible. [KOREA CULTURAL HERITAGE FOUNDATION]