A lifelong love of books

A lifelong love of books 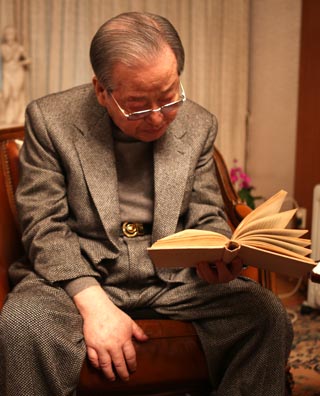 Kim Jong-pil reads the first edition of the book “JP Column,” published in 1971, at his home. [KIM CHOON-SIK ]

When I was a child, I was known for running wild around my village, but also for my affinity for reading. By the time I was in fourth grade, I was already fascinated by the memoirs and biographies of world leaders, especially the ones on French hero Napoleon Bonaparte.

I was most fond of biographies of people with excellent leadership skills, like Napoleon, and I found myself delighted by the idea of the limitless achievements of humanity.

History is made by men, I thought, so therefore I must understand the men who have made history.

I spent numerous nights reading books. There are more than 30 books written by and about former British Prime Minister Winston Churchill, and I have read all of them, cover to cover.

But it was during my middle school years when I read the most. I finished reading a collection of classic novels written in Japanese. Back then, I had a rule that I had to read one book each night, and when I couldn’t finish, I would skip class to do so.

When my Japanese teacher noticed my absence, he would send one of his students to my dormitory to call on me. “Jong-pil is being stubborn again about finishing one book each night,” he would say.

Admittedly, I was proud of my reading habits at the time. I felt proud citing famous poems in Japanese as I walked by classrooms. Most of the books I read at the time were in Japanese, as the Korean Peninsula was under colonial rule, and it was extremely difficult to find books in Korean. Some books were translated into Korean, but they had errors and distortions from the original English version because they were translated from English to Japanese, then to Korean again.

At 90, I still read books. I wake up at around 3 a.m. and indulge myself over and over again. But these days I often read books that I’ve read before, rather than new ones.

It’s a flat lie when people say they simply don’t have time to read. People can always find time to read, at least two to three hours a day. I feel like I have done nothing in a day when I skip reading.

The books that I read when I was full of angst in my teen years later paved the way for me to become a statesman and often influenced my way of thinking.

During the Korean War, the books I read motivated me to be a brave soldier and provided me with an acute sense for strategy. They also propelled me to wage a military revolution, with the strong determination for national growth, and the creativity to make it happen. For every bumpy road in my political career, I persevered, my principles cemented and formed by the multitude of books I read. 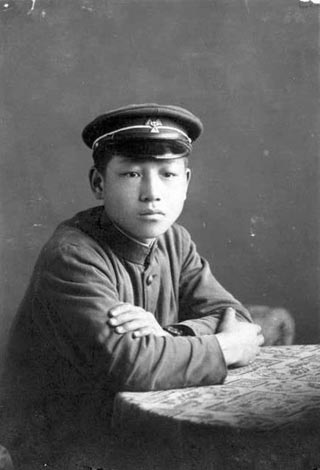 I don’t like straight talk. Rather, I prefer to speak metaphorically, and I often borrow lines from poems to make my point. Bluntness confines a person’s ideas and his expressions. But in speaking poetically, they can extend their thinking beyond words to fully express their thoughts and sentiment.

His support base also rallied the public, demanding they vote out politicians in their 70s - in what was an indirect jab at me.

Their tactics to target me over my age was enraging. But I never confronted them directly. Instead, I cited the poem “Youth,” by Samuel Ullman. I translated this masterpiece into Korean and distributed the result to my fellow lawmakers in early 1996.

Let me cite some parts of the poem: “Youth is not a time of life; it is a state of mind. … Nobody grows old merely by a number of years. We grow old by deserting our ideals. … Years may wrinkle the skin, but to give up enthusiasm wrinkles the soul.”

In my translation, I used the Korean word for “spirit” rather than “soul” to better emphasize the determining factor of one’s youth.

The efforts by Kim Young-sam and his political faction ultimately ended in vain. Instead, it merely confirmed what I already knew - that the power of metaphors and poetry is more potent than fighting words.

Poetry also linked me with my late wife, Park Young-ok, who passed away early last year. At the height of the Korean War, I asked her to marry me, reciting a line from the poem “One Word More” by the British writer Robert Browning.

I wrote her a letter, asking her to marry me, and at the end, I added, “Once, only once and for one only.”

I still vividly remember the smile that flashed across her face she when she read the letter. Sixty-five years have passed since then, and when I visited her gravesite last year over the Chuseok holiday, I put down a flower pot with that line engraved upon it.

The four-character Chinese idioms I write on New Year’s Day each year can also be traced back to my childhood lessons on the works of the great philosopher Confucius. Most of the ideas he expressed some 2,500 years ago still apply today.

This has long been my way of reflecting on my own inner-strength, as well as my way of expressing myself to others. In good times and bad, I always pick up a brush and write down four very personal characters. And as I complete one character after another, I feel like I am reaching toward a greater version of myself, with each letter awakening within me a feeling of inexplicable strength.