A show of solidarity

A show of solidarity 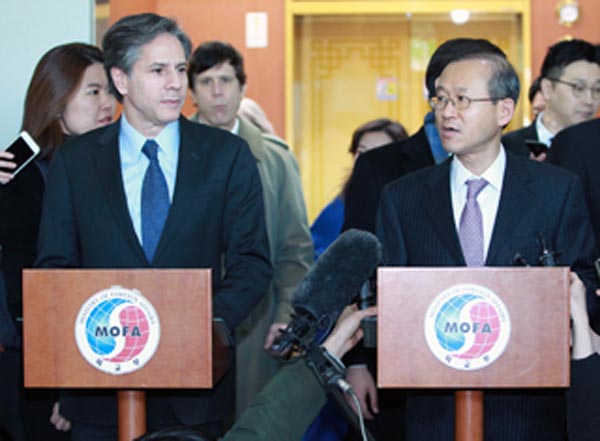 U.S. Deputy Secretary of State Antony Blinken, left, and Korean Vice Foreign Minister Lim Sung-nam, hold a joint press conference Wednesday at the Ministry of Foreign Affairs in central Seoul, where they affirmed Seoul and Washington’s “extraordinarily close coordination” in response to North Korea’s fourth nuclear test. During his two-day visit to Korea, Blinken also met with Foreign Minister Yun Byung-se to discuss punitive actions to be taken against North Korea, which include United Nations Security Council sanctions. The defense secretary pointed out that China has “more influence and more leverage” over Pyongyang than any other country and is looking to China to “show leadership” in that capacity. He added before departing for Beijing that day that he would discuss the issue with Chinese officials. [PARK JONG-KEUN]