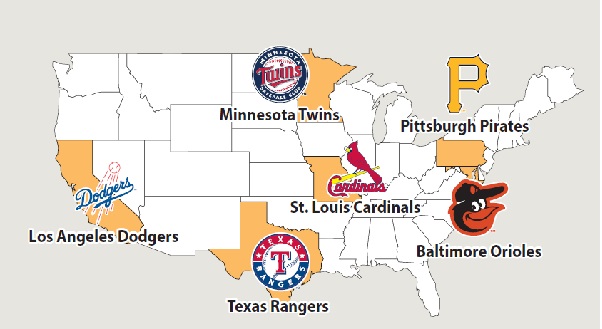 This year, many Korean baseball fans will be forced to make a choice in the morning: make it to the office on time, or finish watching their favorite players duke it out overseas.

That’s because this season, at least six Koreans have secured spots in the Major League Baseball.

Korea’s invasion of the MLB started in the off season, with slugger Park Byung-ho sealing a four-year deal with the Minnesota Twins, followed by outfielder Kim Hyun-soo joining the Baltimore Orioles and pitcher Oh Seung-hwan landing at the St. Louis Cardinals.

They will be joining existing major leaguers Choo Shin-soo of the Texas Rangers, Kang Jung-ho of the Pittsburgh Pirates and Ryu Hyun-jin of the Los Angeles Dodgers. 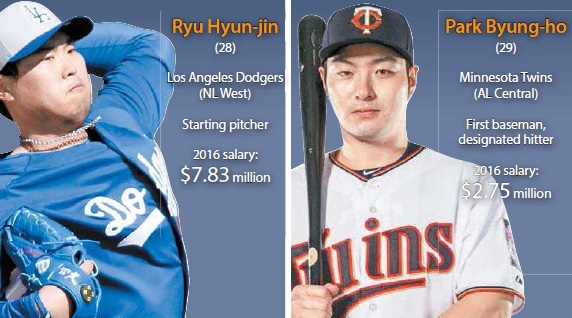 If Ryu, who skipped last season due to a shoulder injury, and Kang, who was sidelined near the end of the season with an injured left knee, fully recover in time to play for the season opener, fans will be able to see Koreans facing off in the big league 61 times in 2016.

In 2005, there were seven Koreans in the MLB. All of them, except Koo Dae-sung, went straight to the MLB without playing in the Korea Baseball Organization (KBO). 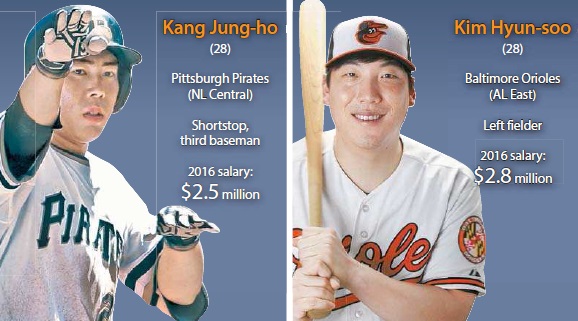 But this year, every player except Choo spent time in the KBO before landing in the United States, which has drawn more attention from Korean baseball fans.

The number of Korean-on-Korean games this season could increase if former Fukuoka SoftBank Hawks and Lotte Giants slugger Lee Dae-ho inks a deal with an MLB club, or if minor leaguers Lee Hak-ju and Choi Ji-man earn their promotions. 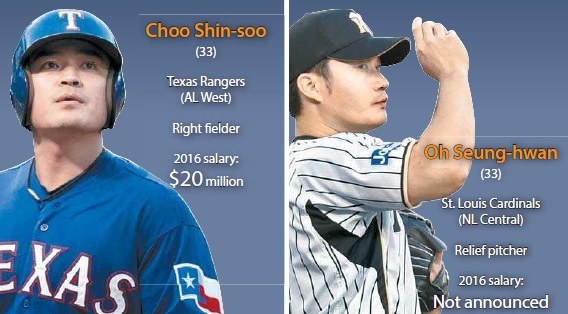 Among Korean big leaguers, Kang and Oh will meet most frequently. Kang’s Pirates and Oh’s Cardinals are in the National League Central Division, and they’re scheduled to face off 19 times. These games are highly anticipated by local fans, as it’s a matchup between hitter and pitcher, and their teams are also division title contenders. The Cardinals won the division last year with a 100-62 record, edging the Pirates by two wins.

Kang posted a .287 batting average with 15 home runs and 58 RBIs in 126 games, finishing third in the NL Rookie of the Year award. Oh is coming off an impressive two seasons in Japan where he collected 80 saves and won the saves title in the Nippon Professional Baseball’s Central League.

The two will be the first Koreans to see each other, as the Pirates host the Cardinals on Apr. 4 (Korean time) at their home PNC Park for the season opener.

In their meetings in the KBO League, Kang has gone 4-for-13, including a home run and three RBIs from Oh. But since 2013, Oh hasn’t allowed a single hit from Kang.

Park and Kim will share their big league debuts as because their teams are the first to face each other. From Apr. 5 to 8, Kim’s Orioles host Park’s Twins.

Kim, who is a career .318 hitter in the KBO, the second-highest batting average among all active players with at least 3,000 home plate appearances, previously said that he hopes both get a hit when they meet each other, but that he want his Orioles to defeat the Twins. Park, who won home run and RBI titles in the KBO in past four seasons, said he has big expectations for the game.

But KBO fans are particularly interested in seeing how Ryu, Kang and Kim perform when they meet. All three made their pro debut in 2006.

In the KBO League, Kang went just 6-for-33 against Ryu, who was with the Hanwha Eagles. But on Oct. 4, 2012, Kang, then with the Nexen Heroes, bashed a solo shot to block Ryu from getting his 10th win of the season. Ryu could have collected at least 10 wins for seven consecutive seasons if it wasn’t for Kang’s home run in the seventh to tie the game. The lefty pitcher eventually ended the season 9-9.

When Kang entered the big league last year, he joked that he hoped Ryu would give him a “good pitch” in at least one of his three appearances at bat. But since Ryu was out for the season with his injury, they’ve yet to meet in the United States.

Ryu’s Dodgers and the Kang’s Pirates are set to compete June 25.

Ryu might want to avoid meeting Kim. The former Doosan Bears player was strong against Ryu, going 13-for-36.

But the five-time KBO strikeout title champion has done well against Choo, who hits left like Kim. In his first meeting against the Rangers outfielder on July 28, 2013, Ryu didn’t allow single hit, although he did allow a walk.

Korean fans will be especially busy watching games in July. Starting with a game between the Twins and the Rangers from July 2 to 4, the Orioles and the Dodgers are to meet from July 5 to 7, while the Cardinals and the Pirates square off from July 5 to 8. The Rangers and the Twins also have games from Jul. 8 to 11, meaning that if Korean players don’t’ suffer injuries, fans can see Koreans playing each other for 10 days in a row.