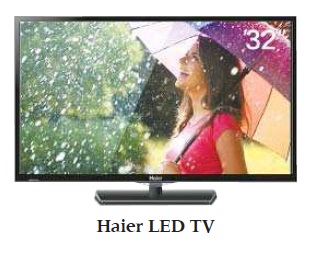 Haier, China’s biggest consumer electronics producer has launched a 32-inch high-definition LED TV in Korea for only 199,000 won ($164), up to 300,000 won cheaper than TVs with similar specifications from Samsung and LG Electronics.

The TV that goes under the Mooka brand will be sold only at online shopping malls here and the price varies between 199,000 won and 299,000 won depending on sellers.

The Haier TV is equipped with the latest technology such as the ability to receive and play terrestrial digital TV content, with high-definition multimedia interface and mobile high-definition link, a connection that allows a larger display from a mobile device.

Haier initially unveiled the brand in 2014 only for the Chinese market and it has gained popularity among younger buyers.

“We decided to roll out the Mooka brand in Korea to more proactively address the Korean online marketplace, where price competition is intense,” said a Haier Korea spokesman. “We are sure the Mooka TV will bring a wind of change to the budget TV market in Korea,” he added.

The Mooka brand will mostly appeal to younger buyers who pursue a “reasonable consumption style,” as well as good quality and service, the spokesman explained.

Haier is staging marketing campaigns to prop up the brand’s recognition in Korea. It began offering a discount of 100,000 won for the 32-inch TVs on Wednesday from 299,000 won to 199,000 won and giving out a Sandisk USB memory chip to the first 500 buyers.

The arrival of the budget TV from Haier in Korea came three days after the Chinese manufacturing giant made a landmark deal to purchase General Electric’s appliance business for $5.4 billion. The acquisition is intended to steer Haier away from its image of being a cheap refrigerator producer and transform itself into a high-end maker of cutting-edge Internet-connected kitchen products.

In the U.S. consumer market, Whirlpool is the main player, followed by LG, GE, Samsung and Electrolux. Haier takes up sixth place. But Haier could vault into second position after its merger with GE, analysts predict.