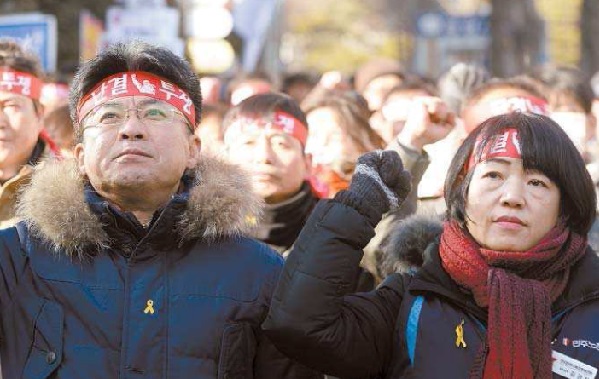 Byun Seong-ho, left, president of the KTU, leads a rally outside the Seoul High Court, which Thursday ruled in favor of the government’s decision to outlaw the progressive teachers’ union. [NEWSIS]

The Seoul High Court on Thursday ruled in favor of the government’s decision to outlaw a progressive teachers’ union, dealing a blow to the group’s two-year legal battle to stay alive.

The appellate court’s decision to uphold a lower court’s ruling to outlaw the Korean Teachers and Education Workers’ Union (KTU) effectively removed the legal rights the group has enjoyed since September 2014, when the Seoul High Court issued an injunction to suspend the government’s decision to outlaw the group.

The high court’s decision was expected given a Constitutional Court ruling last year that Article 2 of the Teachers’ Labor Union Law, which bans dismissed teachers from having union memberships, was constitutional. That was the issue that led to the government’s outlawing of the KTU. The KTU argued that the article violated the basic rights of teachers.

“In accordance with the ruling by the Constitutional Court, a claim by the plaintiff that Article 2 of the Teachers’ Labor Union Law was unconstitutional cannot be legally accepted,” said the court Thursday.

The court said the KTU was required to comply with the article that prohibits it from allowing fired teachers to be members.

“As it is apparent that the KTU has been accepting non-education workers as its members, the labor ministry’s notice to outlaw the group is not against the law,” the court added.

The legal battle between the 27-year-old union and the government began in October 2013 when the Ministry of Employment and Labor stripped the KTU of its legal status after the union refused to comply with a government demand that it expel nine members who were dismissed from their schools.

In June 2014, the lower court agreed with the government that the group had failed to comply with Article 2 of the teachers’ labor law.

In September 2014, the Seoul High Court issued an injunction requested by the KTU to halt the lower court’s ruling, saying the group would keep its legal rights until an appellate court’s ruling, which was delivered Thursday.

Without any legal standing, the group can’t accept membership fees from its 60,000 members and can’t negotiate with the government or relevant bodies on behalf of teachers it represents.

Its full-time workers, 83 in total, will be ordered by the Education Ministry to return to schools. It remains to be seen whether they will comply or go out on the streets to protest.

The beleaguered union made it clear it would appeal to the Supreme Court.

“Today’s verdict is shameful as it illustrates how backward Korea is in regards to international standards [on labor rights] and the retreat of democracy,” said Byun Seong-ho, president of the KTU on the verdict.

While hailed by some for championing democratic values inside classrooms and driving out a culture of graft in the education sector since its foundation in 1989, the KTU has also been criticized for its leftist political ideology and for being heavily motivated by political issues, such as its opposition to U.S. beef imports or the four-river restoration projects of the Lee Myung-bak administration.

It has also been a vocal critic of the Park Geun-hye government. The group was given legal status in 1999, 10 years into its foundation, by the liberal Kim Dae-jung government.