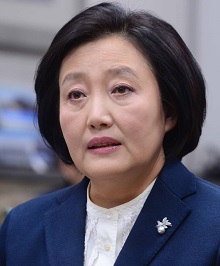 Rep. Park Young-sun announces Thursday in her office at the National Assembly her decision to stay with the Minjoo Party. [NEWSIS]

Rep. Park Young-sun, a three-term lawmaker who once served as the acting chairwoman of the main opposition party, said she will stay with the Minjoo Party, defying speculation that she would join the People’s Party established by Rep. Ahn Cheol-soo.

In a statement posted on her Facebook page, Park said she would stay where she is now and concentrate her efforts on reinventing the party and on her crusade to bring about economic and social justice.

Park, a TV journalist-turned-politician, is a prominent face in the liberal opposition party. She was the first woman to serve as the party’s floor leader and to chair the National Assembly’s Legislation and Judiciary Committee.

Nicknamed the “chaebol sniper,” she has sponsored a series of bills intended to regulate the unfair business practices carried out by Korea’s industrial giants.

Last year, Park also promoted a bill to go after the family behind the country’s largest conglomerate, Samsung Group, demanding that the scions repay the $2.2 billion windfall from a business deal made in 1999, which was later ruled illegal by the courts.

As speculation grew that Park may join Ahn’s People’s Party, main opposition leaders attempted to stop her, knowing her departure would likely trigger more lawmakers - particularly reformists in the capital region - to follow her lead.

Park said she decided to stay out of respect for her 30-year connection to Kim Chong-in, who was recruited last week to head the Minjoo Party’s campaign.

Minjoo Chairman Moon Jae-in vouched for Kim, known as the architect of President Park Geun-hye’s economic policy during her 2012 presidential campaign, saying he would help the main opposition bring “economic democracy” to Korea.

“The possibility to realize economic democracy has finally come to the Minjoo Party,” Park said in her statement, sparking questions as to whether she would play a key role in the campaign committee chaired by Kim.

However, Park said she has not yet specifically discussed the matter.

Kim is scheduled to announce the formation of his campaign committee for April’s general election today.

“Chung, the former president of Seoul National University, agrees that the people capable of realizing the final task for shared growth must join forces,” she said. “If he will participate in politics, he will do so in our party.”

Chung, she pointed out, has also known Kim for more than three decades. “We talked privately that we must work together to achieve what we have talked about over the past 30 years,” she said.

Chung, a renowned economist, served as prime minister from 2009 to 2010 under the Lee Myung-bak administration. He stepped down after just 10 months, however, after his term was marred by a failed attempt to revise a plan to relocate government ministries to the Sejong City administrative complex.

Chung’s suggestion to revise the blueprint ? he proposed that Sejong City be used as an industrial and science complex rather than a remote capital ? was met with fierce resistance from the liberal opposition party as well as Park Geun-hye, a lawmaker at the time, and her loyalists in the ruling party.

Park Young-sun’s decision to stay with the Minjoo Party deals a serious blow to Ahn’s new party, especially because it was also trying to recruit Chung.

Ahn left the main opposition party on Dec. 13, followed later by a group of lawmakers from the Minjoo Party.

While its goal is to recruit at least 20 lawmakers to form a negotiation bloc inside the National Assembly, it currently only has 15 representatives, including Ahn.

If the group manages to recruit 20 or more lawmakers, it would be entitled to negotiation power in the legislature and state subsidies.

If the party manages to form a negotiation bloc by Feb. 15, it will receive 8.8 billion won ($7.24 million) in subsidies ahead of April’s general election

The exodus to Ahn’s party, however, has ceased over the past few days, jeopardizing the ambition of forming a third negotiation bloc in the legislature, currently dominated by the Saenuri and Minjoo Parties.

Rep. Cho Kyoung-tae left the Minjoo Party on Thursday, but chose instead to join the ruling Saenuri Party.

Similarly, Rep. Park Jie-won is scheduled to leave the Minjoo Party today, though he will remain an independent.

Reps. Kim Yung-rok, Lee Yoon-seok, Park Hae-ja and Lee Gae-ho were also expected to leave the Minjoo Party this week to join Ahn, though they have decided to delay their decisions.