Coloring books for a good cause

Coloring books for a good cause 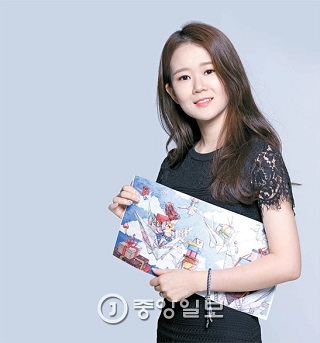 The royalties from Song Ji-hae’s third coloring book will go toward the construction of a hospital for patients with Lou Gehrig’s disease. [KWON HYUK-JAE]

Sometimes in life, the most unexpected ideas turn out to be the most rewarding.

For Song Ji-hae, a 31-year-old textile artist who mainly uses cloth, thread and needles in her art, a coloring book deal was just that.

Song graduated from Ewha Womans University with a major in fiber arts, and working as a full-time artist, she consistently uploaded her designs and sketches on her blog.

Then in 2014, a publisher suggested that she rearrange her drawings in the form of a coloring book.

“I didn’t know much about coloring books,” the artist admitted. “It was unimaginable to me that other people would be coloring in my sketches.”

More than 25 countries have bought the rights to the books, and in the United States, Song received a $200,000 advance.

So as she planned her third coloring book, “All the Presents in the World,” released during the 2015 Christmas season, she decided that the theme of the project would center on sharing.

The book consists of 25 pictures that tell the story of a lonely girl who, despite having everything, travels the world with her cat distributing presents.

All royalties from the book will be donated to the Seungilhope Foundation to help construct a hospital for patients with amyotrophic lateral sclerosis (ALS), also known as Lou Gehrig’s disease.

More than 3,000 copies of “All the Presents in the World” have already been published, with seven countries - including the United States, China, and Japan - holding publication rights.

Like the protagonist in her third book, Song said she understands what it feels like to be lonely. When she returned to Korea after spending her childhood in San Francisco, where her father worked, pictures gave her comfort.

“I had a hard time making friends because I wasn’t fluent in Korean,” she said. “So I drew pictures and showed them to my classmates to overcome my loneliness.”

But making the sketches for the coloring book wasn’t an easy job.

Rather than using a computer, Song draws each sketch with a pen. And each takes about a week to complete. But to Song, the project was special and served as a meaningful collaboration between the artist and the audience. “There are so many impressive ways the readers color in the sketches,” she said. “I get inspiration from them as well.”

Song also volunteered with We Start, which supports children from low-income households, at the end of 2015 to show the participants how art can bring fulfillment. She and a group of children painted a mural on a wall in Guri, Gyeonggi, and if time permits, Song hopes to one day instruct free art classes.