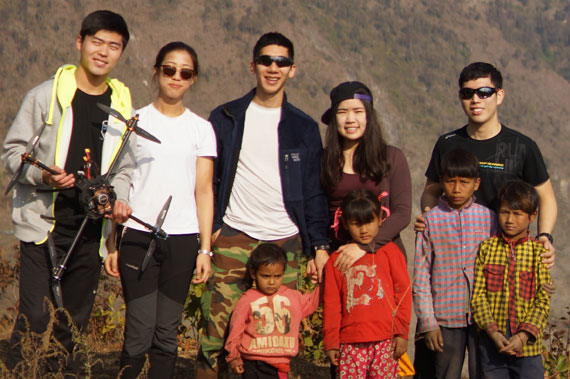 The members of Angel Swing, right, pose with the children from Narjamandap, a village in central Nepal. The drone the start-up team built, pictured above, delivered a box of medicine to residents in the remote area on Jan. 9, several months after the country was rocked by a 7.8-magnitude earthquake that killed thousands. [ANGEL SWING]

Angel Swing, a social start-up established by a group of college students, succeeded earlier this month in delivering medicine to people in remote areas of Nepal.

But their success is even more meaningful considering they accomplished the feat using a drone.

After hundreds of attempts and failures, the eight-member team dropped a box of medicine in Narjamandap, in central Nepal, on Jan. 9, flying their Medi Drone two kilometers away from the village.

The drone is capable of carrying a 1-kilogram box for 30 minutes at 20 kilometers per hour, and the project itself resulting from a start-up class at Seoul National University (SNU). 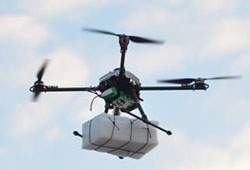 The students formed teams and attempted to execute their envisioned initiatives.

Park Won-nyoung, an exchange student from the Georgia Institute of Technology, and Jeon Suli, a political science major, worked together on the Medi Drone for the class.

But while the two were mulling business ideas, a 7.8-magnitude earthquake struck Nepal in April, killing thousands and devastating the country.

Park, whose major is aerospace engineering, pitched the idea of helping the Nepalese people by creating a drone that could be sold to non-governmental organizations.

He suggested equipping a camera with a drone that could capture pictures of damaged areas and subsequently produce a map with that information.

“It was necessary to understand how much damage was done to the country in order to send supplies or help reconstruct those areas,” Park said. “I heard it was risky for volunteers to actually visit the areas [devastated by the quake], so then the idea came up.”

Park and Jeon embarked on making the drone, joining forces with six other students with a variety of majors, from business administration to materials science. Kang You-bin, Kim Dae-hyun, Kim Seung-ju, Mo Young-hwa, Seo Ji-sook and Choi Sung-jun were all integral in the creation of Angel Swing.

They researched drones using on- and offline resources, and to reduce costs, they procured affordable parts by purchasing them directly via the Internet.

After three months spent working and researching, the group finally completed a drone capable of taking aerial photographs. The drone was handed over to the School of Engineering at Kathmandu University and used toward reconstruction efforts in July.

But Angel Swing didn’t stop there. When the students visited Nepal, they were shocked by the number of people in need of basic medicines and treatment.

“It took five days to reach some remote villages because of the road conditions and mountains,” Kang said. “That’s why we came up with the idea to deliver medicine - people were dying because they didn’t have access to antibiotics.”

Medi Drone is equipped with GPS and altitude sensors so that it can drop boxes of medicines at exact coordinates. The cost for manufacturing the drone was covered by SNU.

Angel Swing left for Narjamandap on Jan. 4 with the drone. It took seven hours via bus and truck from Kathmandu to the village. The team flew the drone at a point two kilometers away from the village with the support of local police.

The medicine box included syringes, vaccines and pain relievers for about 20 people, and was successfully delivered to the residents.

In March, the group said they plan to fly the drone to even more remote villages in partnership with the Nepalese government.