Korea one step away from Rio

Korea one step away from Rio 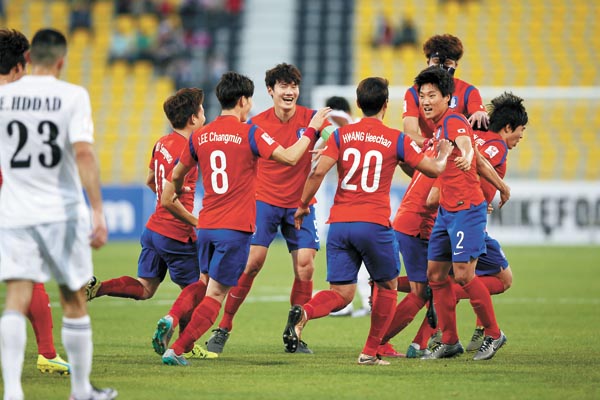 Korea Under-23 football team players celebrate after midfielder Moon Chang-jin scores during the quarterfinals of the Asian men’s Olympic football qualifying tournament against Jordan in Doha on Saturday. Korea won 1-0 and will face host Qatar in semifinals. [KOREA FOOTBALL ASSOCIATION]

Korea is one step closer to Rio after edging Jordan and advancing to the semifinals of the men’s Olympic football qualifying tournament on Saturday.

At Suhaim Bin Hamad Stadium in Doha, Qatar, Korea beat Jordan 1-0 in the quarterfinals of the Asian Football Confederation (AFC) U-23 Championship - which also serves as the final round of the Asian qualifier for the 2016 Summer Olympic Games - thanks to a goal from midfielder Moon Chang-jin.

In this tournament, the top three countries qualify to go to the Summer Olympics in August, meaning that a victory in the semi-final automatically secures a spot in Brazil. The loser in the semifinals must win a third place match to grab the last ticket.

South Korea, which is looking for its eighth consecutive appearance at the Summer Games, will meet host Qatar in the semifinals on Tuesday (Wednesday in Korean time) at Jassim Bin Hamad stadium in Doha. Qatar reached the final four by beating North Korea 2-1.

In the other side of the bracket, Japan faces Iraq.

The biggest change was with the goalkeeper position, where Gu Sung-yun stepped in for Kim Dong-jun, who played all three group qualifying matches but was sick with a cold.

Korea, which won the Group C with two wins and one draw, went aggressive from the start against Jordan, which allowed only one goal in their three matches in Group D.

Kwon Chang-hoon, who scored a hat trick against Yemen in the group qualifiers, could have scored an opener in the seventh minute, but his header from Lee Seul-chan’s cross just missed the target. His shot in the 16th minute went straight to goalkeeper Noureddin Ateyah.

But Korea almost gave up its first goal in the 20th minute when goalkeeper Gu left the box to clear the ball. But Jordan’s Baha’ Faisal failed to put the ball into the empty net, his shot going wide.

Just three minutes after the dangerous moment, Moon stepped up to break the deadlock. After Kwon’s cross from the left side went past two Jordanian defenders, Ryu wasn’t able to tap the ball properly in the box. But the deflection went in front of Moon, who curled the ball with his right foot to put Korea ahead.

It was Moon’s third goal of the tournament after scoring two against Uzbekistan in their group play.

The first half ended with the 1-0 lead, but Korea lost its tempo in the second half, with Jordan reinforcing its attack. Making things worse, Korean striker Hwang had to be substituted in the 56th minute with Kim Hyun after the 19-year-old picked up an injury.

Jordan did score in the 68th minute, but the referee ruled it offsides.

Coach Shin Tae-yong congratulated his players on the victory, but admitted that they lost concentration in the second half and made the match difficult.

“I knew there’s going to be at least one tough moment in the tournament,” Shin was quoted as saying by the Korea Football Association. “I hope that moment never happens after today.”

Shin, however, said his boys will do better in the semifinals against Qatar, and that he will keep checking on ailing players like striker Hwang and goalkeeper Kim.

“Qatar will be a tough match,” Shin said. “But I’ve already analyzed them, so we will train to win. We will treat Qatar as our biggest game thus far.