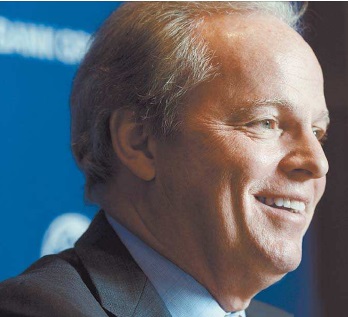 Van Trotsenburg, who made a four-day visit to Seoul to check operations of the multilateral institution’s office in Korea, and meet with various government officials, sat down with the Korea JoongAng Daily last week to talk about current world economic affairs revolving around China.

“I am arguing that there are new opportunities,” said van Trotsenburg. “In China, there’s a growing middle class to around 800 million people in the next 15 years, which will be new demand and new purchasing power.

“People in the middle class would like to have more sophisticated consumer goods like cars and electronics. And who produces them is Korea,” the vice president said.

Since China is Korea’s largest export market, accounting for nearly 25 percent of the total exports, van Trotsenburg confirmed that China’s transition, from an investment and export-driven economy to one led by consumption, is very important to Korea.

“Korea has been successful in exporting to advanced economies, so it may be well-positioned to take the advantage,” he said. “But of course, there needs to be long-term engagement.”

Economies around the world are fearful of impacts stemming from the uncetrain transformation China’s economy. This was clearly demonstrated as major stock markets tumbled in line with growing jitters in the Chinese financial market, since the beginning of this year.

But the World Bank has been aware of coming changes to the Chinese economy, and is not surprised to see the slowdown.

“This is an important transition that has been expected and well managed, and not a surprise,” he said. “I think the fundamentals of the Chinese economy are strong, and when you go through a transition, there are always a series of challenges. We see that in the financial sector. But it is not outside of what we have expected.

“China is important because it determines between 30 and 40 percent of the world economic growth,” the vice president added.

The World Bank has said for years that China is going through a very important shift, towards an economy led by consumption and domestic demand, he explained.

“We have always expected there will be a slowing down of the economy,” Trontsenburg said. “In fact, a couple of years ago, we did a major study, called the 2030 Study, with the Chinese government, in which we actually expected the slowdown.”

Besides slowing Chinese growth, Trontsenburg cited the weakening of emerging markets, fallout from weak commodity prices and slower-than-expected growth in advanced countries central to the World Bank’s gloomy outlook for the global economy this year.

The institution recently cut its growth outlook from 3.9 percent to 3.6 percent.

“The combination of all those factors led to a weaker growth performance [2.4 percent] in 2015, and we hope that it will pick up a little bit to 2.9 percent this year,” he said.

Trontsenburg welcomed the recent opening of the Asia Infrastructure Investment Bank (AIIB), hoping the China-led institution would be a “sister organization” of the World Bank.

“We see that the AIIB is going to try to fill the infrastructure gap in Asia, which is estimated about $1 trillion,” he said. “The World Bank is providing at least $10 billion in infrastructure financing every year only for Asia. Organizations like the Asian Development Bank also make such efforts. But as you see from the numbers, a multilateral organization will not be able to fill that gap alone.

“We will try to be catalytic and proactive on this, and we are happy that we have a broad coalition including the AIIB,” he continued, “We have started talking about the possibility of co-financing.”

“The bottom line is as a multilateral organization, we should provide value added for all, help narrow the infrastructure gap and bring better services to people in developing countries and ultimately make impact on poverty reduction, which can transform lives of farmers,” he said. “I hope the AIIB joins us fairly soon.”

The establishment of the AIIB was controversial worldwide, as the United States objected to it. It was considered a rival to the World Bank, the International Monetary Fund, the multinational institutions led by the United States and other western countries.

“It is interesting to see that over the past 70 years, a lot of organizations were created, but every time we have more business, because the demand for World Bank services is so large,” he said. “Alone, we will not be able to do it. I see strong engagement of all the Asian governments in the World Bank. We would like to have a strong partnership with Korea, too. That way, the World Bank will get stronger.”

The official emphasized the role of the World Bank in helping economies with structural reforms including improving labor forces amid the rapid aging phenomenon worldwide.

“All the interested parties should be at the table, which is a difficult issue,” he said. “One of the mega trends in Asia is aging, and East Asia is one of the most rapidly aging regions, where the labor force is shrinking consequently.”

“You need to consider increasing the retirement age, female participation and immigration in some countries,” he continued. “There are different models, and every aspect has advantages and disadvantages. There are always costs.

“Ultimately, in dealing with labor market challenges, it is important to think about how to increase productivity that is important to determining long-term growth,” van Trotsenburg underlined. “Another dimension is innovation. Because in a world that is moving fast, you need to have cutting-edge technologies. You need to have good innovation potential that keeps the economy very dynamic and being flexible to new circumstances.

“This is going to be a critical area for all societies, not only in Korea but also in Southeast Asia, Europe and the United States, he said.

“It is interesting to see that as a result of globalization, you face the same type of challenges,” van Trotsenburg said. “It’s ultimately which country is best in adapting to them. Looking at Korea from outside, looking at how it has transformed from the early 1950s, is spectacular. If the country continues with the spirit, you should be in good shape.”

Although the World Bank has a grim outlook for the global economy, van Trotsenburg did show a little hope for Asia, and Korea particularly.

“The extreme poverty ratio is 5.4 percent in East Asia, and that is continuing to go down,” he said. “I would say Korea did very well to overcome the 2008 crisis. This is an economy that continues to grow, but may be slower than China. But please look at per capita income. You are nearly hitting $30,000. If you look at in the OECD context, your growth is one of the highest.”

“We don’t talk about why Korea failed, but about how this country made spectacular transformation,” he added.