Sri Lanka’s ambassador has 30,000 workers to worry about

Sri Lanka’s ambassador has 30,000 workers to worry about 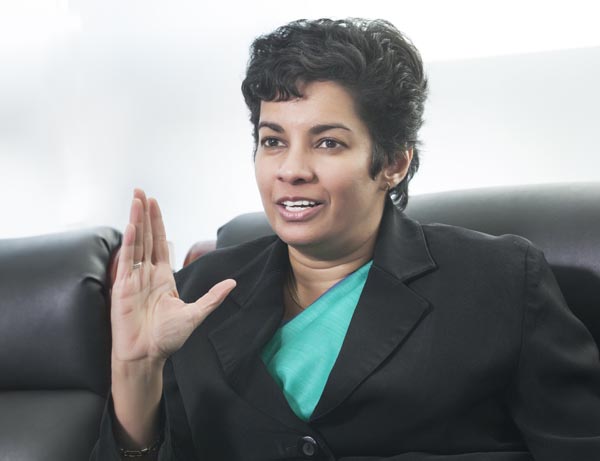 Manisha Gunasekera’s role as the newest Sri Lankan ambassador to Korea came with tremendous responsibility. Aside from the fact that it was her first ambassadorial post since entering the diplomatic corps two decades ago, Gunasekera is tasked with looking after one of the largest Sri Lankan expatriate communities in the world.

“It’s a very big community that plays a very important role for the Sri Lankan economy,” said Gunasekera. “We’re one of a very few countries that look after their welfare very seriously. We have a huge labor section here at the embassy that always takes time to visit the workers and their factories.”

The resources the Sri Lankan government pours into labor, she emphasized, goes to show how crucial the sector is.

And her job is to add impetus to that influx, largely settled in the industrial hub of Gimhae, South Gyeongsang.

“Apart from providing consular services, I try to personally meet with them a lot and make them feel at home, which is why I’m traveling so much around Korea,” she said.

A graduate of the University of Delhi with a degree in English, the top envoy was sworn in last September and has since overseen diplomatic relations between Sri Lanka and Korea, which will mark the 40th anniversary of bilateral ties next year.

Total bilateral trade volume stood at $487 million in 2014, up 29 percent from $377 million in 2013, heavily in favor of Korea. From January through June 2015, Sri Lankan exports to Korea recorded $33 million, while imports reached $155 million, according to data provided by the Sri Lankan Embassy.

Apparel has emerged as the dominant export from Sri Lanka, accounting for 34 percent of total export earnings in 2014. Sri Lanka’s major imports from Korea are iron and steel, petrol and diesel, and knitted or crocheted fabrics, each accounting for 10 percent.

Korean investment in Sri Lanka was valued at $1 million in 2014, largely due to activity in the manufacturing sector.

To take that partnership to the next level, the embassy has planned its annual Sri Lanka Food Festival for this month. The event will kick off Thursday and run through Feb. 7 at the Millennium Seoul Hilton in Jung District, central Seoul, from 6 to 9:30 p.m.

The festival will be held as part of the celebration commemorating the 68th anniversary of Sri Lanka’s independence on Feb. 4.

“There are only a few eateries in Korea that serve Sri Lankan food, and none are in Seoul,” said Gunasekera, adding that the festival will target Koreans with an interest in visiting the country.

Ceylon tea from one of the four Sri Lankan tea companies in Korea will feature as a highlight. The island nation is the fourth-largest manufacturer of tea in the world after China, India and Kenya, and the second-largest tea exporter after Kenya.

But the Sri Lankan tea market here is small, accounting for a mere 1.3 percent of the country’s exports to Korea.

“Coffee seems to have taken over here, but I see great potential [for tea],” Gunasekera said. “Koreans will hopefully learn about the best tea in the world.”