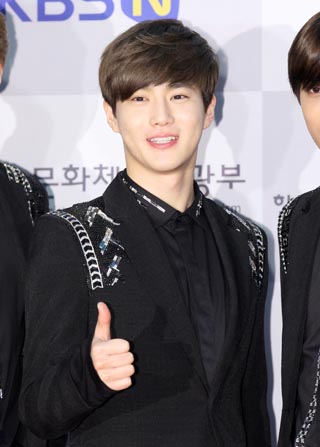 Suho, a member of the K-pop boy band Exo, will appear in the music video of singer Jo Kwon’s upcoming solo song, according to agencies representing the two.

Although Suho is represented by SM Entertainment and Jo is managed by JYP Entertainment, the two artists decided to collaborate for Jo’s solo.

It is the second collaboration between SM and JYP after “Dream,” a duet by Baekhyun of SM and Suzy of JYP.

“Dream” has topped major music portals since its release on Jan. 7.

Suho reportedly filmed the music video of Jo in Songdo, Incheon. The video will be released in early February.

Meanwhile, more details about Jo’s upcoming solo album will be unveiled in the near future. It is his second solo album since 2012.

Jo broke into the music scene in 2008 as a member of the four-member K-pop boy band 2AM. But performances of 2AM are not likely for a while because all four members are represented by different agencies after all except Jo did not extended their contracts.

But 2AM has informed the public many times that the team is not breaking up and would keep performing in the future.