Cold weather proves to be problematic for Seoul’s drivers

Cold weather proves to be problematic for Seoul’s drivers 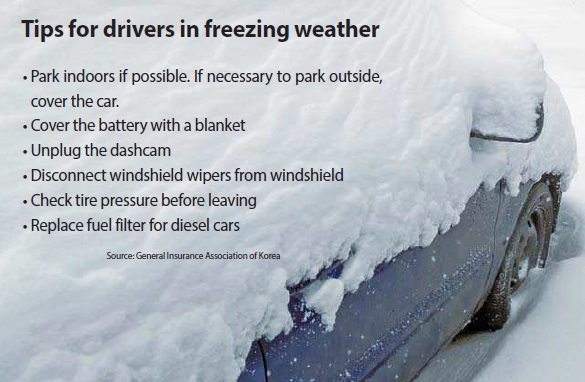 When the temperature hit negative 17.8 degrees Celsius (0 degrees Fahrenheit) on Sunday morning in Seoul, stories began popping up on social media about the battles people were having with their car batteries due to the weather.

“I was on my way to church this morning but am stuck because my engine has stopped,” said one. Another reported having to call an emergency service because his engine stopped working, and said he’d been waiting for help for over an hour.

“We expect requests for emergency service to grow by several multiples from commuting drivers on Monday [today], the beginning of the business week,” said a spokesman for Hyundai Marine & Fire Insurance Group.

The Korea Meteorological Administration forecasted on Sunday that the temperature may tumble to as low as negative 15 degrees Celsius this morning.

According to a transportation and climate environment research institute under Hyundai Marine & Fire Insurance Group, the number of emergency service requests per day is closely correlated with the temperature.

Once the temperature falls into the negatives, every drop in degree raises the number of requests by 22.2 percent.

That means when the mercury hits negative 14 degrees Celsius, the number of emergency calls double compared to negative 10.

The insurance company advises drivers to park indoors if possible, and if they have to park outside, they should cover their car battery with a blanket.

To minimize battery consumption, drivers are advised to turn off their dashcam, which in most cases remains operational even after they leave the car, for safety reasons.