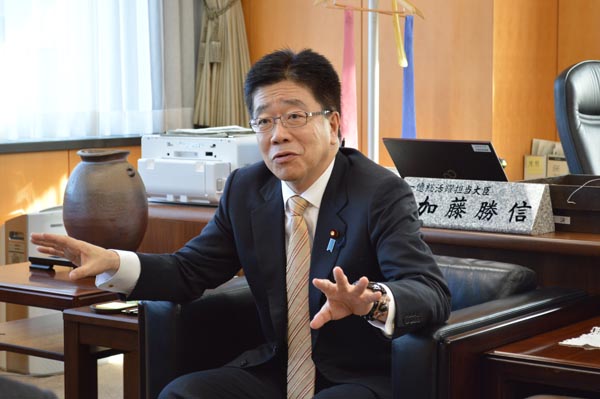 Katsunobu Kato, a new ministerial post in charge of building a “society in which all 100 million people can be active,” talks to the JoongAng Ilbo about his mission to raise the fertility rate to 1.8. [OH YOUNG-HWAN]

Japan was one of the first countries to confront an aging population and a declining birth rate.

In 1989, Japan’s fertility rate fell to 1.57, and the country began to debate how to boost its birthrate.

Its low population remains a major worry. The total population of Japan peaked in 2008 and fell to 126.88 million last year.

Based on the current trend, Japan’s population is expected to decrease to 100 million by 2050 and 50 million by 2100. This is due to the decrease of fertile women.

Last September, Prime Minister Shinzo Abe promoted Katsunobu Kato, a former deputy chief Cabinet secretary, to a new ministerial post in charge of building a “society in which all 100 million people can be active.”

Kato, who started his career in the Finance Ministry, is also in charge of low fertility solutions.

Kato wants to raise the fertility rate to 1.8 through support for couples raising children and increase nursing facilities for the elderly so no one has to quit a job to look after their aging parents.

Japan’s policies contrast with Korea, where it is not even clear which ministry oversees low birthrate issues.

And Japan’s fertility rate is higher than that of Korea, which is now 1.21.

Kato, state minister for measures for the declining birthrate, recently sat for an interview with the JoongAng Ilbo, his first with the Korean media, in his Tokyo office to discuss Japan’s policies on low fertility.

He holds seven titles including minister in charge of the North Korean abduction issue, gender equality, women’s empowerment, and promoting the dynamic engagement of all citizens.

Q. What does the catchphrase “A society in which all 100 million people can be active” mean?

A. There are two significances to “100 million.” It means all Japanese people and people of all ages and sexes - including those who have failed - so that anybody can dream and hope to create a society heading forward. It also signifies that through this, we will maintain a population of 100 million in the future.

What is the Japanese government’s sense of the population problem?

Over the past three years, through the first stage of Abenomics, corporate profits reached record highs and employment improved to the point there is a shortage of workers. However, the “100 million active people” policy came about with the understanding that structural problems, such as the low birthrate and aging society, have to be dealt with now.

I think that if the big engine of growth and distribution is working and the birthrate is raised, we will be able to secure a population of around 100 million people. To sum things up, it can be called an ambitious plan to create a new economic and societal system.

The fertility rate target has been raised to 1.8.

There is a relationship between the fertility rate and people not marrying or delaying marriage, and a 10 percent decrease in married couples giving birth to children. But if asked, “Do you want to marry?” some 80 to 90 percent response affirmatively. People want more than two children. Based on such hopes, the fertility rate is 1.8. If the rate is raised to 1.8, a population of 100 million can be stabilized.

What problems can low birthrate bring about?

As the trend of a decrease in population in rural areas is becoming more striking, it is becoming difficult to sketch out a future. The number of people paying pension premiums is decreasing, while those receiving payouts are increasing. If the market size is reduced, and the number of people who can work decreases, the potential growth rate declines.

What measures will be emphasized in the future?

Policies on security of youth employment and improving income levels have come to a bloom. There is a shortage of venues to meet with the opposite sex. Regional chambers of commerce and many organizations are arranging such meetings. We will support fertility treatments and expand day care facilities to create environments where [parents] can leave their children when they go to work. We are also planning to reduce the burden of university tuition.

Local governments are stepping forward and implementing various measures to help alleviate the burden of housing costs for young couples when they get married. I think the central government has to support such efforts.

There seems to be a lot of effort put toward expanding day care facilities.

Starting from 2013, over the course of five years, we are trying to open 400,000 new [slots for children]. As there has been an increase in working women, and in 2014 there was an increase of children to be taken care of at day care facilities, so this was expanded by 100,000 slots. Of these, 50,000 children will use corporate day care facilities.

What is Japan’s budget for low birthrate policies?

Korea’s fertility rate is among the lowest in the world.

It is the new focus of development for Northeast Asia. Fifty years from now, 100 years from now, low fertility will definitely be a negative factor. China has now abandoned its one-child policy. We need to exchange information on successful and unsuccessful birthrate policies.