Cheaper housing is way to boost number of kids

Cheaper housing is way to boost number of kids 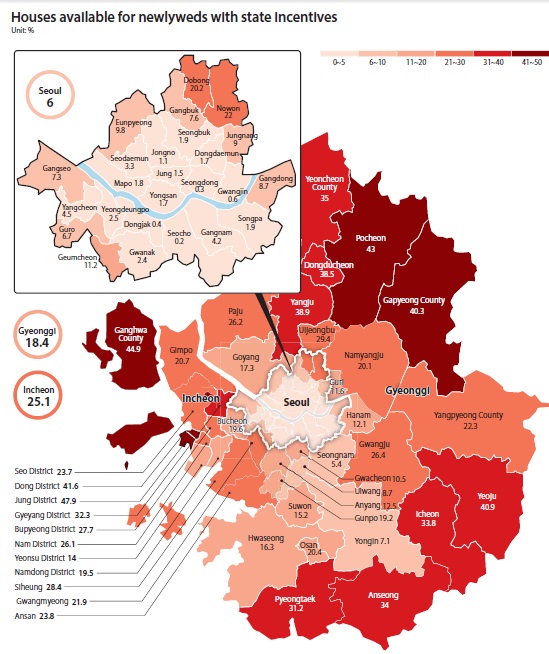 In a country in which the birthrate stands at a grim 1.2, one of the lowest in the world, Nam Gi-hong admits he feels the pressure to add another member to his family.

The Korean government has tried to boost fertility rates for years, but the number of newborns continues to fall and the population continues to age, especially thanks to advancements in medical technology.

Nam and his wife have one child. At 39, he’s considering having a second, but not because of incentives offered by the state or a love of babies.

“I look around and see that most of my neighbors have two kids,” he said recently on a visit to a playground jam-packed with young children near his house in Gijang County, Busan. “There’s this social vibe here that pressures you to raise more than one.”

There are four places in Korea that are considered models of demographic health because they excel in three factors: their annual birthrate, sheer number of newborns and growth in overall population. The four areas are Dangjin, South Chungcheong; Cheongju, North Chungcheong; Gangseo District, Busan; and Busan’s Gijang County.

Dangjin’s secret weapon for family-building is the relatively cheap housing in the area. With less of their income siphoned off to the bank to pay off a mortgage, couples feel more comfortable expanding their families.

Gijang is only a 30-minute drive from Busan’s posh neighborhood of Haeundae. Ulsan, the seventh largest city in Korea, is only an hour away. But house prices in Gijang are 50 to 70 percent of the prices in Ulsan or Busan.

“Land values are pretty cheap here because it’s out in the suburbs,” says Mr. Choi, a real estate dealer in Gijang. “Around 90 percent of my clientele is in their 20s to 40s.”

Kim Ok-jin, 36, used to live in downtown Busan before she settled in Gijang.

“I noticed how apartments here are really cheap,” says Kim. The day care available in the county also impressed her.

The county has two day care centers open throughout the year, until 10 p.m. on weekdays and 6:30 p.m. on weekends. It also boasts a 3.8-kilometer (2.3-mile) hiking trail stretched along a glistening stream, a public children’s library and three maternity clinics.

Analysts say the government’s five-year plan to tackle the dismal birthrate, which was laid out in October 2015, didn’t show much depth of understanding of the underlying problems - or suggest any creative solutions.

“The government did lay out financial support measures for newlyweds’ housing,” says Cho Myung-rae, an urban planning and real estate professor at Dankook University. “But there really wasn’t anything specifically aimed at low birthrates.”

The government will finance up to 70 percent of a jeonse contract through state coffers. To get the full benefit, a couple in Seoul or Gyeonggi would have to search for a house worth at least 170 million won under a jeonse contract, while in other areas they would need to look for a place that costs 128 million won or more.

Eligible couples are those who earn a combined annual salary of 60 million won or less. Jeonse refers to long-term deposit rents.

The government believed that young people were not getting married and having children because of the high cost of housing. Through the new incentives, the government hopes to raise the birthrate to 1.5 by 2020 - a goal analysts scoff at - especially since jeonse contracts are a lot higher now.

In addition, only 37.2 percent of newlyweds in Korea are double-income families, while an entry-level worker who graduated from college has an average starting salary of 34.9 million won.

“Even if a beneficiary couple was lucky enough to find a place to live on a jeonse contract,” suggests Jo Yeong-tae, a professor at Seoul National University’s Graduate School of Public Health, “who would ever imagine having kids when jeonse prices might soar when the contract is renewed two years later?”

“The government may have raised the financial incentive from 100 million won to 120 million won, but as long as the real estate market stays the same, I see no point in offering that incentive at this point.”

A special reporting team from the JoongAng Ilbo set out to track down exactly how many jeonse houses in Korea were available for 170 million won in Seoul and Gyeonggi, and 128 million won in outer regions.

The apartments they found were between 36 and 85 square meters (388 and 915 square-foot), which are the same sizes as the public rental homes offered by the government to a limited number of low-income newlyweds.

A total of 853,622 houses across the country registered with the Ministry of Land, Infrastructure and Transport from January to November 2015 were studied. Houses sold on semi-jeonse deals, which refer to rental contracts that require a larger security deposit with proportionately smaller monthly rent, were included; in this case, only their deposits were calculated.

The outcome was startling.

Only 6 percent, or 7,125 houses in Seoul, were available on a jeonse contract for 170 million won or less. In the posh southern district of Seocho, 0.2 percent was available. The three districts of Seongdong, Dongjak and Gwangjin all had rates bellow 1 percent.

Gangnam District showed 4.2 percent, but the bulk of those were in Gaepo-dong, a neighborhood far from the glitz and glamor. Nowon District, on the very northeastern tip of Seoul, had the highest rate within Seoul of 22 percent.

Areas outside of Seoul fared better. In Gyeonggi, Yongin (7.1 percent), Uiwang (8.7 percent), Seongnam (5 percent), Guri (11.6 percent) and Gwacheon (10.5 percent) the rates were the lowest, while the suburbs of Pocheon (43 percent), Gapyeong County (40.3 percent) and Ganghwa County (44.9 percent) were higher than all other metropolitan cities.

Outside Seoul and Gyeonggi, the provinces of Gangwon, South Jeolla and North Gyeongsang were the most newlywed-friendly in terms of housing, with each rating 34.7 percent, 34.6 percent and 31.2 percent respectively.

“Jeonse contracts are extremely scarce these days,” says Mr. Park, 50, a real estate dealer in Seodaemun District, where only 3.3 percent of houses had jeonse contracts valued at 170 million won or less. “Jeonse houses that were once affordable have now skyrocketed to over 200 million won,” he added.

“Houses that rent on jeonse usually call for 200 million won, but none are available. The ones that I can offer to my customers right at this moment cost more than 350 million won.”