Planes stranded on the runway of Jeju International Airport on Sunday after flights were suspended Saturday afternoon due to heavy snow. [HALLA ILBO]

The southern resort island of Jeju was cut off by snow over the weekend in Korea’s coldest weather in more than a decade.

The Korea Meteorological Administration said 12 centimeters (4.7 inches) of snow fell on Saturday in Jeju City, where Jeju International Airport is located, the biggest blizzard for the semi-tropical island since 1984, when 13.9 centimeters of snow fell.

The runways of Jeju International Airport were shut from 5:50 p.m. on Saturday to at least 9:00 a.m. Monday, cancelling more than 800 flights scheduled to fly in or out of the island.

The ministry plans to arrange additional planes to fly to Jeju to extract people when the weather conditions improve. 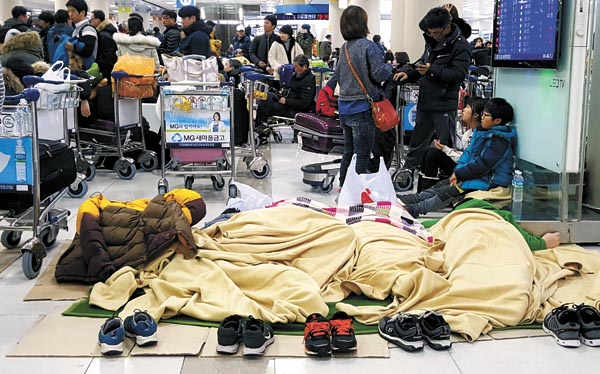 Passengers camp on the floors of the Jeju International Airport early Sunday, waiting for airlines to resume flights out. A flight ban was extended to early Monday after the weather conditions got worse. [NEWSIS]

“As heavy snow, strong winds, and wind shear hit the Jeju airport, every flight will be suspended until Monday 9:00 a.m.,” the Korea Airports Corporation announced Sunday, adding that the schedule was flexible and depended on weather conditions.

About 40,000 people planning to fly out were stranded in Jeju for two days. On Sunday, more than 4,000 travellers who went to the airport expecting to leave had to sleep in the airport, not knowing when they would leave.

“I was stuck in a plane for seven hours which was supposed to take off around 12:40 p.m.,” Kim Jin-hee, a tourist who lives in Seoul, said Saturday. Her flight was delayed for hours and finally cancelled. “I am infuriated that the airline was too slow to take appropriate measures.”

On Sunday, sea routes to and from the Island were also severed as the operation of passenger ferries was banned because of high waves and strong winds.

The Ministry of Land and Transportation offered travellers staying in the airport 300 blankets, 100 mats, 500 loaves of bread and 2,000 bottles of water, but many still ended up sleeping on the freezing floor.

KTX express trains were slowed down over the weekend in the South and North Jeolla regions amid heavy snow warnings. Jeongeup, North Jeolla, had snowfall of 35 centimeters as of Sunday. The snow will continue falling until this afternoon in the west coast regions.

The weather agency said that the cold will start to thaw from Tuesday.

According to the Centers for Disease Control and Prevention, there were 55 cases of hypothermia and frostbite reported between Jan. 17 and 20, double the number of the week before.

Since Dec. 1, nine people have died due to the cold, usually from hypothermia. “If the wind chill temperature drops below minus 25 degrees Celsius, there is a risk of frostbite when the skin is exposed to the cold air for just 10 to 15 minutes,” the CDC said on Sunday, urging people to bundle up.

The cold was even worse in North Korea on Sunday, as the mercury dropped to minus 19 in Pyongyang. In Samjiyon County in Ryanggang, it was minus 37.5 degrees late Saturday.