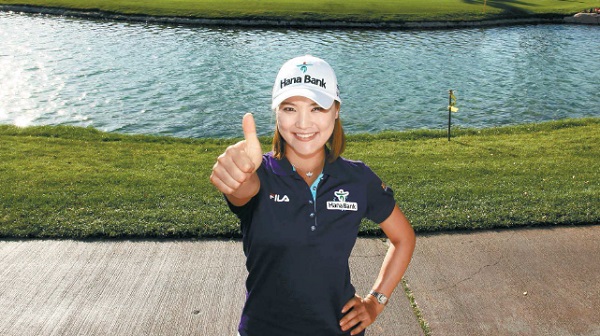 Ryu So-yeon is one of the golfers competing for a spot on Korea’s Olympic team for the Summer Games in Rio de Janeiro this year. She has won two Asian Game gold medals in 2006. [HANA FINANCIAL GROUP]

Ten years ago in Doha, 16-year-old Ryu So-yeon became the talk of the golf community after claiming gold medals at the Asian Games in both the individual and team events.

Ryu says the memory of standing atop the podium, a gold medal around her neck and the national anthem playing behind her, still moves her to this day. But she’s hoping to replace that with an even brighter memory as she competes for a spot at the Summer Games in Rio de Janeiro.

“I feel fresh because it’s finally the year of the Olympics, which I’ve been dreaming of,” Ryu said to JoongAng Ilbo. “My dreams are greedy, though, because there are Olympic spots, gold medals and major tournament victories to win.”

Korea can send four female golfers to Rio based on their world ranking. Ryu, who is ranked fifth, is in a strong position to book a spot, as she has the second-highest world ranking among Koreans behind Park In-bee, currently at second.

Just like in the LPGA Tour, 25-year-old Ryu is expected to compete against younger golfers like Kim Sei-young (world No. 7), Chun In-gee (9), Kim Hyo-joo (10) and Jang Ha-na (13) until the end of July, when the Korea’s Olympics team will be determined. Still, she remains confident about her odds.

“I’m entering my fifth year on the LPGA Tour and I think I have experience that these young players don’t have,” Ryu said. “I’m enjoying my life on tour without homesickness and I adjust to courses quickly.”

If selected, Ryu, who turned pro in 2007, knows her position in Korean women’s golf is different from a decade ago. When she was the youngest player on the squads for the 2006 Asian Games and 2014 International Crown, she had older teammates who supported her during the team events. But these days, she’s the senior, and the Summer Games only include individual events.

“Ten years ago in the Asian Games, I had teammates I could rely on, but now I need to prepare myself and become stronger,” she said. “I also have to overcome pressures and responsibilities I didn’t have when I was a teenager.”

But Ryu, the 2011 U.S. Women’s Open champion, has been strong when representing Korea. Along with the Asian Games victory, she still can’t forget the experiences in the International Crown which 32 golfers from eight countries compete as a team.

“Tour life is tough and lonelier than people think,” she said. “But at the International Crown, I felt strong because of the teamwork and gained energy from being consoled by teammates.”

In 2014, Ryu was paired with Park In-bee, Choi Na-yeon and Kim In-kyung. Although Korea didn’t win the championship, the team did beat the United States in the sudden-death playoffs for the wild card spot in singles play, where Ryu teamed up with Park to eliminate Cristie Kerr and Lexi Thompson, ultimately finishing third.

“When I see national flag on my uniform, I feel a big responsibility,” she said. “I feel that I’m not playing for myself, but for everyone who supports me. It also makes me perform better because I have to live up to the reputation that Korea is a strong country in golf.”

Ryu, who has three wins in the LPGA Tour, has stayed in the top 10 world rankings over the last two years. But even though her performances have been consistent, she’s still not satisfied. Despite collecting a victory in the Ladies European Tour and the KLPGA Tour last year, she failed to win a trophy in the LPGA tour.

“I will give 50 points [out of 100] to my performance last season because I had no wins on the main tour,” she said. “I should have been harsh on myself. This year, I want to be a golfer who wins a lot, instead of delivering steady performances.”

Other than the Olympics, Ryu said her eye is on the British Women’s Open. Last year, she was tied for third in the major tournament with Lydia Ko. Her compatriot Park In-bee won the event, while Ko Jin-young finished second.

Ryu, a 9-time winner in the KLPGA Tour, is also known for staying in touch with her fans through social networking services like Twitter. But sometimes, social media still puzzles her.

“I like to share my daily life with fans,” she said. “But it feels a little weird when people ask me whether the man in a photo I’ve uploaded is my boyfriend.”

Ryu has been also drawing fans with her looks. But she hopes fans will pay more attention to her performance on the field because, after all, she is a golfer.

“My favorite nickname is ‘Sniper,’ which [Park] In-bee gave me,” she said.

“I like to hear, ‘She is a good golfer’ rather than ‘She is pretty or elegant.’”