Little relief at the pump because taxes remain

Little relief at the pump because taxes remain 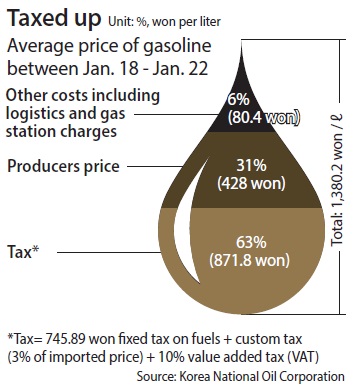 Crude prices have collapsed, but drivers in Seoul aren’t getting the kind of break at the pump they would like.

“The government is not considering [revising the fuel tax rate] as of now,” Vice Minister of Strategy and Finance Choi Sang-mok said on Monday at the opening ceremony of the Korea-Iran Trade and Investment Assistance Center held in central Seoul.

“Low crude prices have an ambivalent impact on our economy,” Choi said. “The government will carry out [policies related to lower oil prices] to help the domestic economy and figure out what kind of assistance exporters need to fight the cheap oil price.”

The price of Dubai crude closed at $23.88 per barrel on Friday local time. With the drop, local refineries’ pretax factory price for fuel was 428 won ($0.36) per liter last week, a nine-year low.

But the retail price of a liter of gasoline averages 1,380.2 won ($1.15). That’s only a 6.6 percent drop compared to a year ago, according to the Korea National Oil Corporation (KNOC) on Monday.

Consumer groups and the public have been calling for refiners’ need to lower prices at gas stations. The companies are arguing that they are not profiting from falling crude prices and blame the Korean tax system for the high prices at the pump.

“We have no more room to bring down our margins,” said a representative from SK Innovation. “We still suffer a low operating profit rate of 1 to 2 percent despite the low crude price. We can’t keep the prices high when the global crude price is low because our factory price is also regulated by the KNOC every week. We update the factory price every week with the latest international crude price and exchange rate data.”

The Korea Oil Station Association (KOSA) has distributed signs for their member gas stations that read, “Dear customer, when you fill up a tank with 50,000 won of fuel, the fuel tax accounts for 30,050 won.”

Taxes account for nearly 63 percent of the fuel charges drivers in Korea pay. That is actually an increase over previous years. Last year, taxes accounted for 58.5 percent of the pump price on average, while the figure was in the 40 percent range between 2012 and 2014.

The government levies a fixed amount of 745.89 won on a liter of fuel. This includes a transportation energy environment tax of 529 won as well as an education tax and driving tax. On top of the 745.89 won, the government charges a 3 percent tax on imported crude oil as well as 10 percent value-added tax. The remaining cost is refiners’ production charges and gas station charges.

“The government has never slashed the fuel tax when international crude prices drop,” Moon explained. “Lowering the fuel tax may make a huge hole in the government’s tax revenues, especially in a tight economic situation like today. It could try to adjust the tax by slightly lowering the import tariff, but it would be so small that consumers wouldn’t be able to feel the change.”