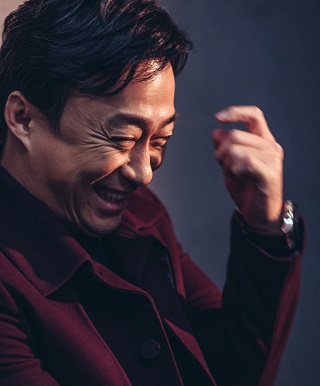 Actor Lee Sung-min is the type of person who cannot fake something he doesn’t feel comfortable with.

Even in front of a camera for this interview’s photo shoot, the actor seemed to lose control of his mouth, blurting out random words just to interrupt the awkward situation. When the reporter said he looked good on the monitor, he became even more shy and said to stop messing with him.

But after a few more jokes back and forth to break the ice, the 48-year-old broke into a broad smile, and that was when the camera shutter started clicking.

After playing the good-hearted manager Oh on the famous office drama “Misaeng” (2014), Lee has returned in a film titled “Sori: Voice from the Heart,” in which he plays the lead role of Hae-kwan. 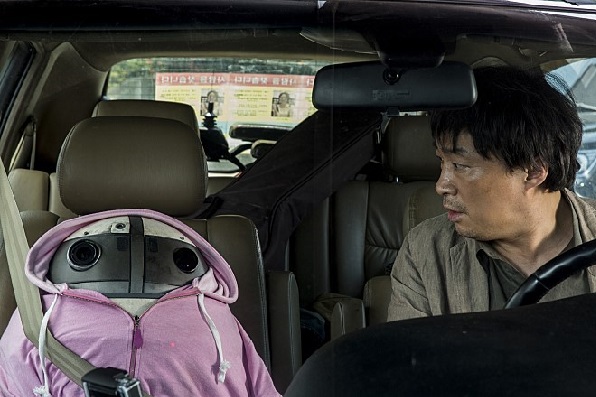 Lee plays a father searching for his missing daughter with the help of a satellite robot named Sori. [LOTTE ENTERTAINMENT]

In the film, Hae-kwan has been searching for his missing daughter for 10 years, but he still believes he has a chance to get her back alive. Then one day, he comes across a satellite robot named Sori who can track any voice to the person’s phone number and hence his or her location.

This is the first time Lee is playing the lead role in a film. In a recent interview with the JoongAng Ilbo, Lee revealed his thoughts on what “good acting” is.

Q. What was it like to act alongside a robot?

A. It wasn’t much different from acting with a real person. The voice actor was always on set to help me out with coordinating lines and moves. It even became possible to produce an ad lib scene.

You must have become pretty close to Sori. What was it like when you parted?

I don’t know if it was because I stared into his eyes so much when filming, but he felt like a human or at least a pet to me rather than a tin can. When Sori was taken away in a minivan after our last shoot, I kind of felt sad.

In the film, the relationship between you and your daughter is pretty rough right before she disappears. How did you interpret the situation?

Isn’t that how all father-daughter relationships look like in their teenage years? That was the reason why Hae-kwan was so desperate to find his daughter even after 10 years, because he feels sorry that he behaved unkindly to his daughter.

How are you toward your daughter?

I try my best to not be a blunt father who always scolds his children. I am thankful that my daughter still behaves as she used to when she was young.

If manager Oh from “Misaeng” and Hae-kwan from this film have a common characteristic, that is being benevolent. How do you feel playing such sympathetic characters?

It is true that I feel comfortable around those characters, perhaps because they resemble much of my own personality. I would like to try out for one of those cold-blooded merciless characters, but that doesn’t work out as much as I would like to.

Why is that so?

If I were to play such a character, I would need to wear a lot of makeup because most antagonists in Korean films outwardly have the appearance of something evil. In that sense, I don’t look that way.

Why should anyone try out for characters that go against their abilities?

I believe that is where the essence of acting lies. If a real beggar should play a beggar, that would seem realistic, but that is not acting. But I think Korean films are consuming much of actors’ images these days, instead of their acting. And once they have consumed enough of that image, they say they are tired of it and look for something new. I feel sorry that there are no efforts being made either by the industry or the actors to turn around the already-set image.

Actors have to break out of their own shells. I believe Tilda Swinton is a good example of that because while she is an elegant actress, she becomes a crooked grandmother in “Grand Budapest Hotel” and a vicious leader in “Snowpiercer.”

Why do you still feel shy after all the years you have spent on stage and in front of a camera?

I can act because I can follow the situation in the screenplay. But for photo shoots, I feel my soul being taken away. But this is a much better version of me compared to before. I can even put my hands in my pants pockets to pose for a photo (laughs).