Dancing queens for more than a decade

Dancing queens for more than a decade 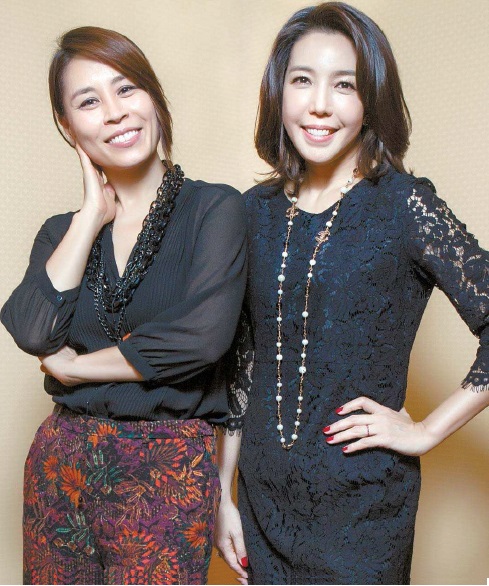 Veteran musical actresses Choi Jung-won, left, and Jeon Soo-kyung will appear again as Donna and Tanya for this year’s production of “Mamma Mia!” which kicks off at the Charlotte Theater next month. [PARK SANG-MOON]

Although the film “Mamma Mia!” (2008) starring Meryl Streep as Donna and Amanda Seyfried as Sophie is more familiar to many than the stage version, this jukebox musical based on the songs of ABBA is to date the most frequently staged musical in Korea.

The show has been performed more than 1,400 times in front of more than 1.7 million theatergoers, in Seoul and 33 different cities across the country.

After being staged for more than a decade, the show has probably been seen by every musical aficionado in Korea at least once or twice. But veteran musical actresses Jeon Soo-kyung, who’s been playing the role of Tanya since the show’s premier in 2004, and Choi Jung-won, who’s been cast as Donna since 2007, say they feel like they are finally in the optimum age to express their characters for this year’s show.

“When I first started the show, I was 39,” said Choi. “The affection I have for this musical is the same back then when I first started and now after I’ve performed it more than a thousand times. But when I think about it now ... I feel like I am finally at the right age where I can totally relate to the emotions of Donna.”

“This musical is like a part of my life,” she said. “Through ‘Mamma Mia!’ I went through many changes in my life, both as an actress and personally as well. I grew up with the show and finally, at this age of 50, I feel what Tanya in the musical feels.”

Back then, both Jeon and Choi say they didn’t know what it was like to have a daughter who is going through adolescence, experiencing their bodies getting a bit rusty, and even going through menopause.

“We both have daughters who went through puberty and know how women going through menopause feel so it’s real,” said Choi. “I finally feel like I’m perfectly suited to play Donna this year.”

“I also feel like the Tanya I play this year will be the best Tanya I could express,” said Jeon. “Back then, since we didn’t have such experiences, all we could do was to use our imaginations to express the emotions of these ladies. There’s a scene in the musical where three women - Donna, Tanya and Rosie - dance like crazy then suddenly strain their backs. I really feel that now when I sing and dance on stage - that my shoulders and legs don’t move like they used to.”

To learn more about the musical and their experiences as Donna and Tanya, Korea JoongAng Daily sat down with the two veteran actresses last week at the Millennium Hilton hotel in central Seoul for an interview. Here are some excerpts.

Q. “Mamma Mia!” has been staged in Korea for more than a decade yet it still is a sellout show. What’s so appealing about the musical?

A. Choi: Of course ABBA’s songs. They are so strong. Everyone knows the songs and those in our age group would have listened to them whenever they turned on a radio back in the day. It also talks about love, which is always appealing, not only the love between man and woman but also between a mother and a daughter and between friends. That’s why I think a lot of people can sympathize with the show.

Jeon: The quality of the work, in terms of story line and music, are guaranteed in steady sellers like “Mamma Mia!” But I personally think the secret to success for the Korean production of “Mamma Mia!” is behind the people who have been with the musical for all this time. Although many cast members of “Mamma Mia!” including myself and Choi Jung-won have played our corresponding roles so much that we know the songs and their personalities front to back, but we participate in it like it’s our first time - meaning that we put our best effort in it.

Just in case we become loose, the staff members and the cast get together every week to check up on ourselves. Such strong will and effort, I believe, has been recognized by audiences who come to see us, and that is why they come to see it again and again.

Jeon: We loved it but at the end of the day, we secretly said to ourselves that ours is better. Of course the English actors seem to be more natural and feel comfortable on stage because it’s their story and their show. But definitely, I feel more energy on stage when Korean actors and actresses perform.

Choi: Both the English and Korean productions have their own charms. But I feel that Korean actors have been better at evoking sympathy from the audience. Because we have different cultures, the relationship Korean mothers have with their daughters will of course be different from what Western mothers have with their own daughters. In that sense, I think we were able to strike a chord.

Usually, when musicals go to cities other than Seoul, the shows are only on for one or two weeks as the demand is not as high. But “Mamma Mia!” showed that even a month-long show is also possible outside of Seoul.

Choi: That’s right. When we first went to cities like Daegu, we didn’t expect it to be so popular, attracting audiences of all ages. That’s why even though we staged it for a month, all of them were sold out. I think it’s also the effort made by the Korean production company to take it to rural areas as well. At first when we premiered, the stage setting and the props were all created for large theaters. But there aren’t such large theaters in smaller towns. That’s why the company decided to make another set of stage setting - a smaller version - so that it could be taken to areas where there have never been such blockbuster musicals before.

Both of you played the characters for so many years, yet I heard you had to audition for this year’s production. Didn’t you feel offended that the organizers asked you to audition for it?

Choi: Not at all. I think that’s the right way to go. Although we know the songs by heart and the characters like they’re our own, I believe we still have to be checked and see we are qualified to perform again. There may be a better Donna or better Tanya performed by other actresses, you never know. Luckily, we got the roles again.