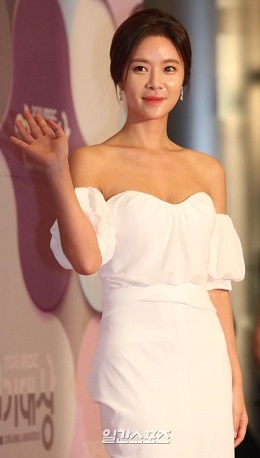 Actress Hwang Jung-eum has set a date for her wedding. According to people working at Hotel Shilla, the 31-year-old actress will walk down the aisle on Feb. 26 at the five-star hotel in Jung District, central Seoul.

The wedding will be open to family and close friends.

The singer-turned-actress’ relationship became public in December after photos of Hwang and her fiance were published by a local entertainment news agency.

After the news reports, Hwang’s management company said that Hwang had been dating her boyfriend for six months. Her boyfriend is known as a young businessman who runs a steel company.

Hwang is one of a few actresses who made a successful transition from singing to acting.

She debuted in 2001 as a member of the now-defunct girl group Sugar. But she soared to stardom after appearing on the popular reality TV show “We Got Married” with her former boyfriend and singer Kim Yong-jun of the K-pop trio SG Wannabe in 2009.

On the reality TV show, which pairs up celebrities and makes them experience life as a married couple, Hwang gained popularity for her down-to-earth and bubbly personality.

Since then, she has been acting and earning rave reviews from viewers and critics alike.

She starred in two popular drama series - “Kill Me, Heal Me” and “She Was Pretty” - last year alone.