Eximbank to focus on struggling industries

Eximbank to focus on struggling industries 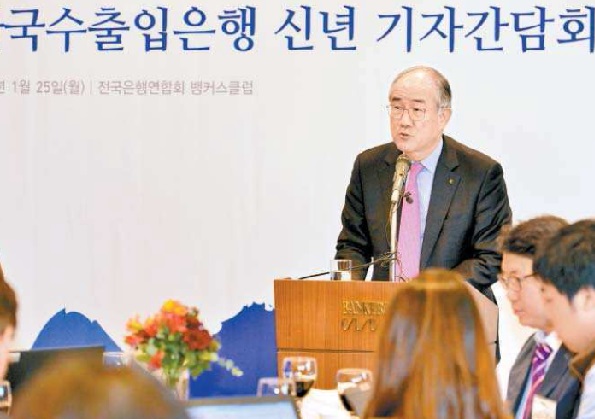 Lee Duk-hoon, chairman and president of the Export-Import Bank of Korea, speaks at a press conference on Monday at the Bankers Club in central Seoul. [KOREA EXIMBANK]

The Export-Import Bank of Korea will transform from an “exporter supporter” to an “industry overseer” in order to help manage corporate risk amid growing economic uncertainty, the state-run bank’s head said.

At a press conference Monday on plans for 2016, Chairman and President Lee Duk-hoon emphasized the expanded role of the government-owned financial institution in salvaging struggling businesses and providing adequate funds for key industries in order to bolster economic recovery.

“As economic conditions are expected to remain harsh this year, Korea Eximbank will focus on what it has to do,” Lee said. “Amid prolonged difficulties at home and abroad, an export-driven Korean economy will face harsher conditions, in which Korea Eximbank should play a more active and preemptive role.”

The bank decided to provide 75 trillion won ($63 billion) in loans and guarantees for local companies this year, down 6 trillion won from the previous year. It scaled back the credit size due to reduced orders at Korean businesses amid falling oil prices.

“It was inevitable to scale back financial support because of decreased orders in a global slump across all industries,” Lee said. “But whenever the situation improves, the bank will immediately expand the size.”

Despite the slight cut in total financial support, the institution said it will increase support for new service firms from 2.5 trillion won to 3.5 trillion won.

The bank usually provides funds for heavy industries - construction, manufacturing and shipbuilding - that are going through painful corporate restructuring due to falling profitability.

“The reopened Iranian market will be a new target for us, where we will help our businesses occupy the market,” Lee said.

In addition, the bank created a new team to find ways to work with the new Asia Infrastructure Investment Bank.

As for the controversy over the institution’s fiscal soundness, the president stressed the uniqueness of the public financial institution.

“We inject public funds into struggling industries, which is financially very risky,” Lee said. “But we are managing our soundness at the same level as normal commercial banks, which should be clear to the public.”

Korea Eximbank’s so-called capital adequacy ratio stood at 10.11 percent in 2015 due to increased lending with the weakening won. The capital adequacy ratio is the ratio of capital to risk, and the minimum ratio to be compliant with regulations is 8 percent. The bank’s ratio fell below 10 percent in September, becoming the lowest among local financial institutions and spurring controversy over the state-run institution’s financial health.