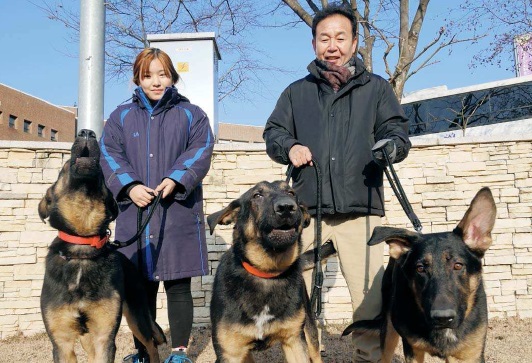 A professor and student from Daekyeung University train the three German Shepherds cloned from the heroic search and rescue dog Trakr, who saved the last survivor in the Sept. 11 terrorist attacks on the World Trade Center. Korean stem cell researcher Hwang Woo-suk donated three puppies harvested using Trakr’s DNA to the university in North Gyeongsang so that they can also be trained to become rescue dogs. [DAEKYEUNG UNIVERSITY]

The search and rescue dog Trakr, recalled for his heroic efforts to save lives following the Sept. 11, 2001 terrorist attacks in New York, died in 2009 but lives on thanks to the wonders of science.

The three pups, male German Shepherds, were cloned in Kim’s lab in April last year with genes harvested from Trakr, which grew into embryos that were then implanted into a surrogate mother.

“These cloned dogs have inherited the most outstanding genes in the world,” Hwang said Wednesday in a ceremony at Sooam Biotech in Guro District in southwestern Seoul, “so I hope that the university can train them well so that they can help advance Korea’s rescue dogs.”

Hwang chose to donate the dogs to Daekyeung because it is the only domestic university that has an animal training department.

To help advance the caliber of rescue dogs in Korea, Hwang contributed some 450 million won through donating Trakr’s clones to the university.

Starting Monday, Daekyeung University began training the clones, providing one trainer for one dog. The puppies will first be trained in basic discipline.

The basic training program, to span six months, will teach the puppies to recognize people, leap up high steps, distinguish the smell of blood and jump over obstacles.

Afterward, they are expected to be dispatched to local airports to sniff out drugs and provide support in emergency situations.

“Even though they are just 9 months old, they weigh 25 kilograms (55 lbs) and their height from foot to head is over 60 centimeters (2 feet), so they’ll be able to undergo discipline training within six months,” said Park Sang-hyun, the general affairs director at Daekyeung University.

Trakr, a Canadian German Shepherd, worked for three days straight without rest in rescue efforts following the attacks in 2001 on the World Trade Center in New York.

With his handler, James Symington, a Canadian police officer, the dog located the last remaining survivor, who had been buried in under 10 meters of rubble for more than 26 hours.

He suffered from burns and chemical and smoke inhalation, which later led to nerve disorders. The heroic rescue dog died eight years later, in 2009, at age 16. That year, a U.S. biotech company reached out to Hwang to clone five puppies from Trakr - Trustt, Solace, Valor, Prodigy and Deja Vu.

Hwang, once a renowned stem cell pioneer and animal-cloning specialist, came under fire in 2005 when it was revealed that his stem cell research was fraudulent and ethically flawed.

The Seoul National University (SNU) professor was fired from his position in 2006 and convicted of exaggerating his research as well as embezzling 2 billion won ($1.8 million) in sponsorships.

He has since been slowly rebuilding his career and in 2015 partnered with the Chinese biotech company Boyalife Group to open the world’s largest animal-cloning factory in Tianjin this year.