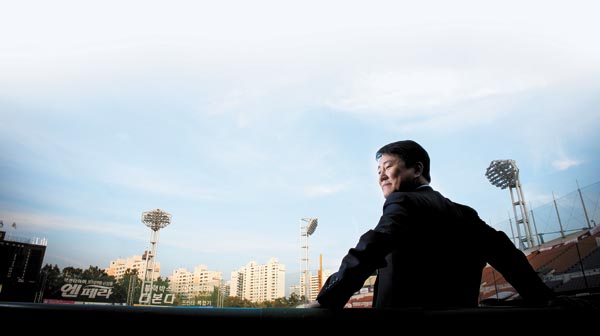 When Lee Jang-seok bought the Hyundai Unicorns and turned them into the Nexen Heroes in 2008, local fans thought he was just a con man out to make a buck by selling players to other teams in the Korea Baseball Organization (KBO).

But now, the 49-year-old Nexen Heroes CEO is recognized for leading a paradigm shift in the professional baseball league. While the nine other KBO clubs were founded and are operated by Korean conglomerates, the Heroes have been surviving on their own, for example by selling their naming rights to Nexen Tire.

Fans now call him “Billy Jang-seok,” combining his name with that of former Oakland Athletics general manager Billy Beane, the focal character in the book “Moneyball.” Just like Beane, Lee focuses on sabermetrics, the empirical analysis of baseball stats. He has enough knowledge of baseball to be considered an expert.

Despite negative views on the club’s future, Lee, a former M&A consultant and financial analyst, is turning the Heroes into a sustainable club, producing results on and off the field.

According to its audit reports, the Heroes’ annual sales in 2012 totaled 22.2 billion won ($18.5 million) and jumped to 31 billion won in 2014. Last year, after collecting a posting fee for the transfer of Kang Jung-ho to the Pittsburgh Pirates, the Heroes reached 35 billion won in sales.

This year, Lee is expecting 50 billion won. The Heroes recently received a $12.85 million posting fee from the Minnesota Twins after their slugger Park Byung-ho reached a deal with the Major League Baseball (MLB) club.

The team also inked a new sponsorship deal with Nexen Tire reportedly worth about 10 billion won.

In an interview with the JoongAng Ilbo, Lee said he hopes the Heroes will actually make a profit this year from broadcasting revenue, ticket sales and advertising.

A. For Yoo, we failed to re-sign him. As for Son, we tried to grab him and offered a specific amount of money, but the Lotte Giants offered more than that. I don’t want to be in a competition where teams keep raising their offers after other teams bet.

There are opinions that there is excessive spending in pro baseball players’ contracts. What do you think?

The Samsung Lions are participating in a move to reduce spending in pro baseball. Personally, I support their change. There are small teams like us that have to survive on their own, but teams like the Hanwha Eagles and Lotte Giants that are desperately in need of a championship win have to spend some money. I think there is no fun if all 10 clubs are alike.

At first, you and the Heroes didn’t have a good impression from baseball fans.

In 2008, I think I was the person who heard the most curse words on earth. I heard people calling me a con man and even comparing me to a dog. In 2009, when one media outlet reported that the Heroes were going to be bankrupt, our contracted partners rushed to our office to pay back the money. About 5 billion won was up for stake in a month. When I went to the KBO board meeting, people in other clubs seemed be laughing at my situation. In my mind, I was sharpening my knife to show that they were wrong.

But now, people’s evaluations are different. Why do you think that happened?

I have survived on the road that everyone said would be a failure. Now, even the league’s top club, the Samsung Lions, is joining the move. People tell me I have made a new wave in Korea’s professional sports, and some call me a pioneer. I feel proud of it, but there is still a long road ahead.

In the book “Moneyball,” there is a part where a manager [head coach] and general manager clash over whether a player should be in the game. What’s your take?

The management and squad can’t always have the same idea. What’s important is whether they have respect for each other. We have 107 players and 25 coaches on our team. What binds these guys is not baseball but a mindset that we are professionals. It’s amateur to say to management, “Have you ever played baseball in the field?” What we are doing here is business.

Is it true that the Heroes focus on players’ wins above replacement (WAR) stats when evaluating them?

Yes. It will account for about 70 percent of players’ evaluations. Park Byung-ho has averaged 7.5 in the last three years [meaning that the team has earned at least seven wins in the season because of Park’s performance.]. When Kang Jung-ho was at his best, his WAR stat reached about 10, which is equivalent to season MVPs.

What difficulties do you foresee in the Heroes using the Gocheok Sky Dome as the home stadium this season?

What’s important is the quality of the batted ball because there is going to be no wind. In order to produce a good batted ball, what’s important is whether the players can have their own style of swing. Our players tend not to “hit” the pitch but “tap” the ball because they don’t want to get struck out, and this makes pitchers avoid the batter. If you are a man, you need to take on the opponent directly, and that is professional. We play 144 games in a season. Considering fans, we need to reduce our playing time.

In “Moneyball,” Billy Beane is supported by Paul DePodesta from Harvard University. Do the Heroes also have a person like DePodesta?

We scouted a guy last year from Samsung who has a master’s degree in statistics, and he is working at our strategy team. Today, thinking ahead and predicting the future becomes more important as we look into the data. For instance, our strategy team and training coach studies how the on-base plus slugging percentage will turn out if a player increases his muscle and enhances his batting speed. The combined WAR figure from players who left our team is about 24, and we are running simulations on how to fill this void.

What do you want to say to Park Byung-ho?

He should not think too quickly on his first swing. If he is going to take a swing on the first pitch that is going to be a strike, he should produce a hit or at least make a foul. I’m not talking about just cutting the ball, but delivering the pitch out to the field. By doing that, pitchers will feel pressure and fear when trying to get a first strike on Park.

In “Moneyball,” Beane says there is a moment where you are just going to have to love baseball. Was there also a similar moment for you?

I feel that way when my trusted players became big players. When we acquired the Hyundai Unicorns in 2008, only Kang Jung-ho caught my eye, and I told others that I liked him. Park Byung-ho joined our team from the LG Twins on July 31, 2012, through a trade and became a monthly MVP in August. I still remember screaming with joy because we had our first MVP.

What do you want to earn from baseball?

Happiness. I’m a fortunate guy because I’m doing a job I like. When I founded an investment company in 2007, there were many business opportunities to make big money. But later, I started in the baseball business, and everybody called me crazy. It was a coincidence then to be in baseball, but now, it is fate.