Jeon aims to be ‘cold blooded’ at table tennis

Jeon aims to be ‘cold blooded’ at table tennis 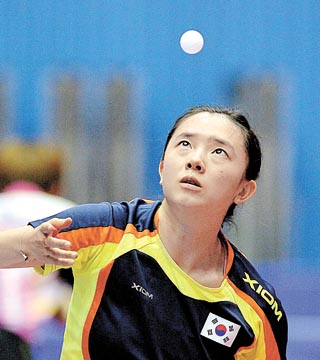 Table tennis player Jeon Ji-hee doesn’t speak perfect Korean yet, but she will be representing the nation at the Summer Olympic Games in Rio de Janeiro in this August.

Originally born in Langfang, China, Jeon became a naturalized Korean in 2011. Since then, the 23-year-old has been putting all her efforts into representing the nation.

On Tuesday, the Korea Table Tennis Association announced that Jeon had been named MVP for 2015.

Jeon, born as Tian Minwei, first learned table tennis from her father, who coached the sport. She eventually played for China’s youth team, but she never managed to make the senior national team.

“In China, people say anyone can be the champion if they can qualify for the national team,” she said. “Everyone dreams about being on the team when they’re 15. Just like people think that going to good college guarantees success, going to the national team means same thing in China.”

Jeon said the only reason she came to Korea was to keep playing.

“My career was done in China,” she said.

It wasn’t an easy decision for the teenage girl, but after her parents agreed, Jeon landed in Korea at age 16. By then, she had already taken about two years off from playing table tennis, but began train again while learning Korean through dramas and movies.

Now, Jeon feels no difficulty talking with national teammates, but still finds it difficult to use messaging services like KakaoTalk.

“I still stay quiet when we talk in a group chat,” she said.

Under the Chinese zodiac, 2016 is the year of monkey, and fans have been saying that this is Jeon’s year, because she shares the same zodiac sign.

Things are off to an auspicious start. Along with Yang Ha-eun, she won the women’s doubles event at the Hungarian Open in Budapest last weekend.

But Jeon, who is ranked 11th in the world and the highest among Koreans, said she is concerned because in China, a person’s zodiac year is actually unlucky for them.

“Maybe I should carry something red, which is regarded as fortunate color in China, when I go to the Olympics,” she said with a laugh. “Maybe I should dye my hair red, but that will bother my coach.”

Because of the International Table Tennis Federation (ITTF) rules on naturalized players, Jeon couldn’t play for Korea for three years after becoming a Korean. But after her suspension was lifted in 2014, she went on to collect a bronze medal at the Asian Games in mixed doubles and last year, she took a gold medal at the Gwangju Summer Universiade, also in mixed doubles.

Jeon, who won the women’s single national table tennis championship last month, knows there are many things to improve before the Summer Games, but she’s especially focused on gaining more control over her mind.

“When I see an opportunity, I get hasty and make mistakes,” she said.

To fix her problem, Jeon has decided to decided to spend her free time alone at her house in Songdo, Incheon.

“When I play with my friends, I get excited a lot and if this keeps going on, I think it will not be easy to control my feelings when I’m at the game,” she said. “I want to be cold-blooded when I’m playing the table tennis.”

With the Summer Games just about 200 days away, Jeon said she is feeling the pressure as there is lots to do before her Olympic debut. She knows her naturalized citizen tag will draw some of attention in Brazil, but wants to show her best performance first.

“There are no borders in sports,” she said. “I will be honored to participate in the Olympics as a Korean player. Since this is also a big opportunity for me, I’ll give it everything I have.”