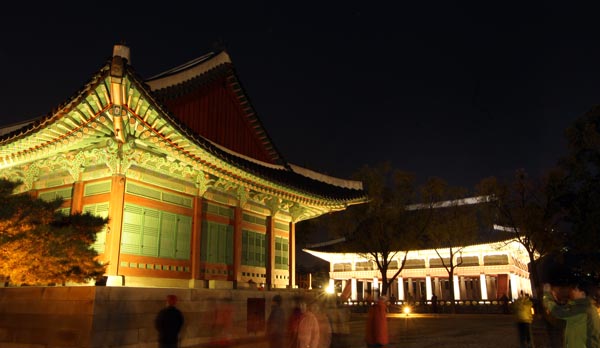 Tourists visit Gyeongbok Palace in central Seoul for a nighttime tour. The Cultural Heritage Administration announced Tuesday that the number of nighttime tours will be increased from 48 to 120 this year. [CHOI SEUNG-SIK]


Tours of cultural heritage sites - especially for nighttime viewing of major palaces in central Seoul - will be extended this year.

This effort is part of the Cultural Heritage Administration’s (CHA) plans for this year, which the government agency announced on Tuesday.

The CHA said it has responded to tourists’ requests for more nighttime tours of the Gyeongbok, Changgyeong and Changdeok Palaces in central Seoul.

Every year, nighttime tours of the Gyeongbok and Changgyeong Palaces operate at four times: March to April, May to June, July to August and September to October. In 2015, there were nighttime tours on a total of 48 days, but from now they will be extended to 120 days. The nighttime tours will start from March 1.

The popular moonlight tours of Changdeok Palace will also increase from 32 days to 49 days.

In addition, the Sojubang, a royal kitchen at Gyeongbok Palace, will be utilized as an open space for the visitors to experience the royal cuisine of the Joseon Dynasty (1392-1910). As the Sojubang was the main backdrop for the TV drama “Daejanggeum” (2003-04), which was popular across Asia, many foreign tourists are expected to participate.

Among the other plans, familiarization tour programs for Gyeongju and the Baekje Historic Areas will be newly developed and launched this year. In April, the CHA will test-run the programs, and the official start will be between July and September. The programs will let visitors experience the historic sites with fully renovated cultural resources.

The CHA also outlined plans to hold a conference in Gyeongju, North Gyeongsang, in October on the topic of how to return Korean cultural assets that are currently kept in other locations worldwide to this country.

“This year, the Cultural Heritage Administration will actively carry out the new programs as the laws to execute the plans were passed last year,” Rha Sun-hwa, the head of the CHA, said. “There was lots of trial and error along the way that made many disappointed in our work, especially the arson of Sungnyemun, the historic gate which is the No. 1 National Treasure, in 2008.”

“We are reconstructing the rules and our mind sets for managing the cultural properties to regain the confidence,” Rha added.

From this year, the official period for inspecting architectural heritage sites and national treasures built outside will be shortened from five years to three years. Furthermore, emergency management will be strengthened by employing information and communications technology.