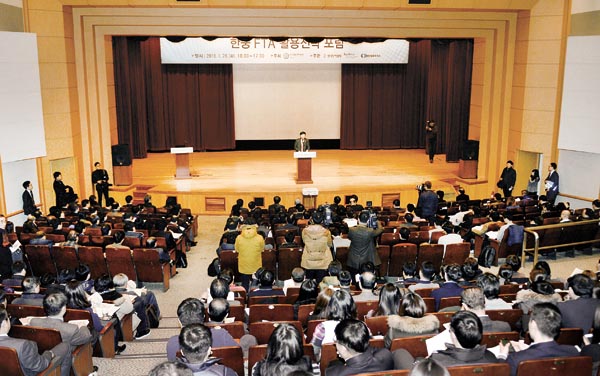 Minister of Trade, Industry and Energy Joo Hyung-hwan makes a speech at a forum about the Korea-China bilateral trade agreement held at COEX, southern Seoul, on Tuesday. [MINISTRY OF TRADE, INDUSTRY AND ENERGY]

Minister of Trade, Industry and Energy Joo Hyung-hwan also promised follow-up negotiations this year on the Korea-China FTA services and investment chapter in order to get China to liberalize its services market further. Joo was speaking at a forum hosted by the Korea International Trade Association at COEX, southern Seoul on Tuesday.

“It is true that China could be an unfavorable variable for Korean economy, as the country’s growth rate fell below 7 percent for the first time in 25 years, which will reduce its intermediate parts imports [from Korea],” Joo said. “But China is still one of the world’s fastest growing markets and, of course, will remain the most significant trade partner for us this year.”

China’s contribution to global economic growth from 2010 through 2020 is estimated at 27.1 percent in terms of purchasing power, double the size of the United States’ 12 percent, Joo said, quoting International Monetary Fund statistics.

Exports to China last year stood at $137.1 billion, accounting for 26 percent of Korea’s exports, compared to the 22.4 percent exported to the United States and EU members, according to the Institute for International Trade. However, exports of consumer products accounted for only 5 percent of total shipments to China, while intermediary products were responsible for nearly 75 percent.

The ministry is supposed to announce detailed support policies by the end of March to boost exports of cosmetics, fashion, baby and medical products to China.

The ministry will also expand financing for small online shopping malls to team up with global e-commerce websites like Taobao and T-Mall to exploit the Chinese market. It aims to get a total of 2,000 small Korean shopping malls in partnerships with global malls by end of this year.

Korean shipments to China via online shopping accounted for less than 0.1 percent of total exports to the country last year, according to the ministry.

The Korean Trade Ministry also kicked off a four-day investment cooperation forum on Monday in Beijing and Shanghai to attract direct investment from Chinese food and cultural content producers, as well as high-end fashion and cosmetics producers and retailers. It’s target is $2.5 billion by end of this year.

Some 30 Chinese businesses attended the forum’s Monday session, including the New Hope Group, an agricultural, livestock and dairy producer; Lancy Group, a fashion giant; and Anbang Insurance Group. They were encouraged to build production facilities in the Saemangeum Korea-China Industrial Cooperation Complex and the Iksan National Food Cluster in North Jeolla and to invest in resort complexes in Korea to attract Chinese tourists.