Economy barely grew in the last quarter of 2015

Economy barely grew in the last quarter of 2015 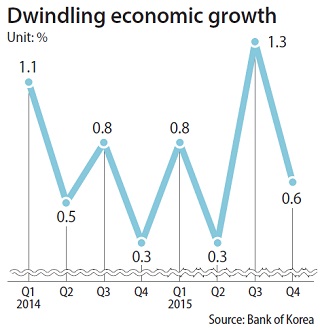 Is the Korean economy running out of steam?

Concerns are mounting that near-zero percent growth in the final quarter of 2015 might signal an even weaker economy this year.

With a weak improvement in domestic consumption, the Korean economy grew only 0.6 percent in the last three months of 2015 compared to the previous quarter, dragging down the annual growth rate to 2.6 percent, the lowest in three years, according to the Bank of Korea Tuesday.

Central bank data showed that fourth-quarter GDP growth was barely maintained thanks to a 1.5 percent growth in private consumption compared to the previous quarter. The slight improvement in consumption is attributable to the government-led discount events like Korea Black Friday and a consumption tax cut for individuals that ended last year.

Although private consumption showed anemic growth in the final quarter of 2015, the construction industry was a major drag as investment in the sector plunged 6.1 percent during the October-December period, the biggest fall in a year.

The sharp fall in construction investment is attributable to a base effect - stemming from an increase in investment in the previous quarter - and a significant decline in real estate transactions in the fourth quarter.

“The base effect significantly impacted the fourth-quarter figure, while growth in housing transactions slowed in the fourth quarter,” said Jeon Seung-cheol, director general of economic statistics at the Bank of Korea. “The housing market is expected to perform no better than last year.”

Exports expanded 2.1 percent compared to the third quarter, while imports climbed 2.8 percent. But the export sector’s contribution to GDP growth fell 0.2 percentage point in the fourth quarter, decreasing for the sixth consecutive quarter.

This came as an unpleasant surprise considering that the Korean economy showed signs of recovery in the third quarter of 2015, in which it expanded 1.3 percent, the strongest growth in five years. The government said it made all-out efforts to boost the economy through stimulus, including an 11 trillion won ($9.13 billion) supplementary budget and two interest rate cuts by the central bank.

“I think the government policies had quite an impact on the economy,” said Hong Jun-pyo, a research fellow at Hyundai Research Institute. “There was some improvement in the domestic sector, but still there are concerns about the production side as rising inventories show, largely due to adverse export conditions.”

There is widespread disappointment at the government for failing to achieve its 3 percent growth goal last year. As quarterly growth has fallen below 1 percent, doubts are rising on whether the situation will improve in 2016.

“There is a low possibility that the first-quarter growth can turn out better than the fourth-quarter,” said Lee Chang-seon, a research fellow at LG Economic Research Institute. “Considering that private consumption showed a slight improvement due to policies that ended in December, consumption is expected to show a decrease in January, while exports are expected to continue slowing.”

The new economic team of the Park Geun-hye government has no plan for additional fiscal stimulus.

Exports are expected to continue falling due to low demand for Korean products abroad, hit by the weakening of major foreign currencies such as the Chinese yuan and Japanese yen and all-time-low oil prices as well.

Experts say the government needs to come up with stimulus measures.

“We expect the government to roll out similar measures to boost consumption around the Lunar New Year, like the Korea Black Friday event,” Lee said. “Otherwise, it will be difficult to see better economic data than the past quarter.”

“Rather than focusing too much on short-term growth this year, it would be better for the government to put its efforts to ramping up long-term growth potential by supporting the R&D and human resources development,” Hong said. “Along with efforts in a long-term perspective, the government can still use short-term measures such as frontloading the budget early in the first quarter.”

The government will spend 125 trillion won during the first three months of this year, 8 trillion won more than it did in the same quarter last year in order to prevent a so-called “consumption cliff.”

“The government is frontloading the budget in the first quarter to stave off concerns about consumption contraction, uncertainties from the Chinese economic slowdown and low oil prices,” Yoo said at the meeting held at the Sejong Government Complex.

The Finance Minister hinted that he doesn’t see a 2.6 percent growth as an overly low expansion. In fact, earlier, he was confident it will reach 3 percent by the year’s end.