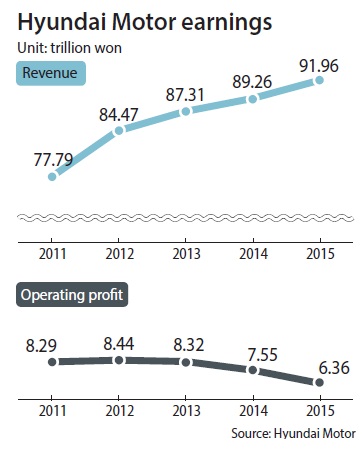 Net profit also tumbled 14.9 percent over the same period to 6.59 trillion won, due to weakened currencies in emerging markets and intensified competition.

The lower profits came even as the top automaker sold a record-high number of vehicles, at 4.96 million, last year to post its highest-ever revenue of 91.96 trillion won, up 3 percent from a year ago. Revenue for the fourth quarter also rose 5 percent year on year to 24.76 trillion won, but operating profit nose-dived 19.2 percent to 1.51 trillion won.

“As currencies in emerging countries such as Russia and Brazil depreciated sharply and competition among carmakers got ever more intense, profitability in 2015 was down to an extent,” Hyundai Motor CFO Lee Won-hee said in a conference call.

Although the carmaker saw domestic sales improve by 4.2 percent year on year, reduced demand from key markets including China led international sales to fall 0.6 percent from a year ago.

Despite the deteriorated circumstances, Lee vowed “to keep up with our efforts to improve shareholder value by expanding the dividends greatly, a measure following the introduction of interim dividends for the first time last year.”

The nation’s second-largest conglomerate will offer 3,000 won in year-end dividends per common share. When the interim dividend of 1,000 won that the company gave out last September is taken into account, the dividends from each share is set to become 4,000 won, the highest figure in the history of Hyundai Motor, totaling 1.79 trillion won for all shareholders. That is 32.1 percent more than the 817.3 billion won from a year ago.

The automaker came up with a gloomy outlook for this year, though it set the sales goal for 2016 at 5.01 million, slightly more than last year’s 4.96 million.

“Low growth is expected to persist as the Chinese economy is feared to slow down further, international oil prices are set to remain low and insecurity in the financial markets of emerging economies are seen to persist,” the company said in a statement.

Hyundai promised to step up investment in research and development, with a particular focus on eco-friendly vehicles, as a solution to address uncertainties in the management environment and solidify the basis for sustainable growth.

Meanwhile, LG Electronics, which trails Samsung as the nation’s second-largest electronics maker, announced on the same day that its revenue for the fourth quarter edged down 5 percent from a year earlier to 14.6 trillion won, but operating profit surged 27 percent year on year to 349 billion won, largely thanks to improved profitability in TVs and consumer electronics.

In mobile communications, which includes the smartphone business, LG saw an operating loss of 43.8 billion won during the October-December period last year. The result marks an improvement of 33.8 billion won from the previous three months’ loss, but it indicates that the world’s fifth-largest smartphone producer is still having a hard time recovering from its swamp of deficit.

For the 2015 as a whole, operating profit fell 35 percent from a year ago to 1.19 trillion won, while revenue dropped overall by around 4 percent to 56.5 trillion won.