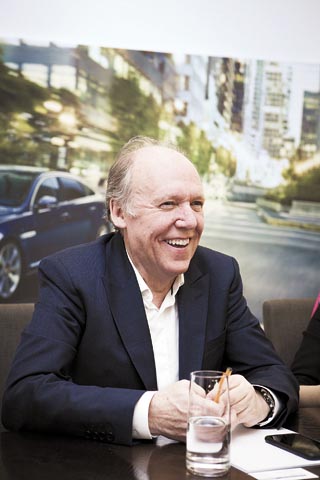 Ian Callum has been director of design for Jaguar, one of the world’s oldest luxury automakers, since 1999. Working for a company with such a long history, it is tempting to solely focus on maintaining its heritage and tradition.

But during a visit to Seoul on Monday - his second since 2013 - to introduce the company’s latest upgrade of its luxury XJ sedan at Dongdaemun Design Plaza, Callum said reflecting new technology and innovative designs is equally important.

The Scottish-born Callum is considered one of the world’s top three car designers alongside Peter Schreyer, who worked at Volkswagen and Audi before his current position as head of design at Kia Motors, and Christopher Edward Bangle, who worked as BMW’s chief designer.

In a meeting with the Korea JoongAng Daily after the unveiling of the new XJ, Callum, now in his 60s, said Jaguar has always been trying to be more creative and artistic.

“What we have to do is bring back the values of the heritage and the past,” Callum said.

But he stressed that maintaining heritage and tradition does not mean copying the designs of old cars.

“Heritage can be challenging,” he said. “If you hold on to heritage too much, you end up with something slightly too old.”

Callum said innovative changes in design have always been met with challenges from loyal fans of the 81-year-old Jaguar brand. In fact, Callum is famous for getting rid of the circular headlamps that were a distinctive design of the brand, as well as the Jaguar emblem on the hood of the vehicle.

The designer said he tried to also implement changes to the latest model of Jaguar’s flagship sedan, its eighth since the XJ’s debut in 1968, by making it modern and youthful while preserving elements of the company’s heritage.

Callum said all in all, the most important part of design was keeping the whole car distinct from its competitors.

“I think [the new XJ] looks a little different from all the other cars in that category because it’s a Jaguar … more creative than, perhaps, other products that are available,” he said. “That’s what Jaguar should be.”

Callum said young Korean consumers seem attracted to Jaguar because of the cars’ unique designs compared to even German competitors.

Although the German automakers - BMW, Mercedes-Benz and Volkswagen - continue to dominate imported car sales, Jaguar’s popularity over the years has been steadily increasing.

Korea is the fourth-biggest market for the XJ after China, the United States and United Kingdom. While 1,901 units of the XJ were sold in 2013, that figure increased nearly 48 percent last year to 2,804 units. For all Jaguar models, Korea is the fifth-largest market.

Callum said his creativity and inspiration comes from diverse sources ranging from the arts and music to architecture and photography.

“What I try to do is to work out why I like them so much … the sense of drama, sense of excitement … and bring that feeling into the car design,” he said.

For the XJ, Callum said his inspiration was the car’s first model released in 1968. He tried to capture the distinctiveness of the original XJ model without copying its design.

Callum advised budding car designers to focus on art and creativity from diverse sources as much as they devote time to metrics and mechanical engineering. Since the standards for car designers are very high and the market is competitive, Callum advised young hopefuls to “be very good and work very hard … [car design] can save or destroy a car business.”

When asked about his favorite Korean brand, he answered “Peter Schreyer’s Kia series” but shared no more comments on his fellow designer’s work.

The new XJ comes in a total of 10 lineups with different body lengths, engines and driving systems. The 3.0L V6 turbo diesel model, a new engine type, offers 300 horsepower and maximum torque of 71.4 kilogram-meter (516.4 foot-pound). Users can also enjoy features such as All Surface Progress Control, which helps drivers through poor road conditions, and InControl Touch Pro, which provides an entertainment service with touchscreens. Its price ranges from 109.5 million won ($91,000) to 226.7 million won.