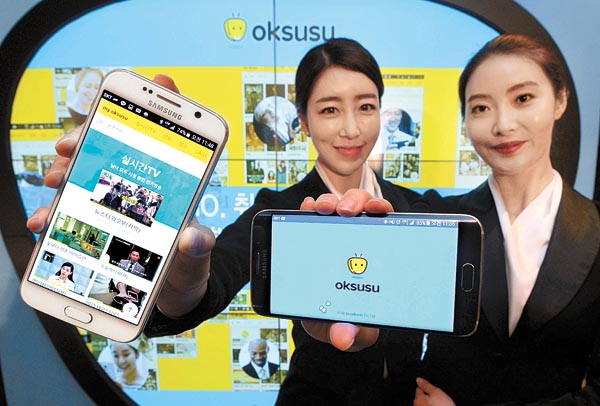 The move follows U.S.-based Netflix’s decision to join the ranks of active players in the Korean streaming market, setting the stage for stiff competition.

SK’s oksusu, which means corn in Korean, will provide real-time TV programs, movies, sports channels and YouTube-style content when it opens tomorrow, regardless of the telecom company one uses.

“Oksusu will bring in different interesting and novel video content across genres and countries,” said Yoon Suk-am, head of the media business division at SK Broadband.

Of the diverse offerings, the key selling point is the wide range of sports content from 33 different channels.

Alongside the sports channels, oksusu will have some 8,200 movies and drama series from both local and overseas broadcasters like the BBC. There will also be 98 TV channels streaming content in real time.

The new service will succeed SK’s Btv and Hoppin. While the old platforms primarily served SK Telecom users, oksusu is poised to absorb a broader audience.

Users of Btv and Hoppin will automatically be transferred to oksusu.

To build up market share, SK Broadband set monthly fees at 3,000 won ($2.5), lower than comparable service providers which charge some 5,000 won per month.

“In the beginning phase, we will focus on attracting new subscribers with lower fees,” Yoon said.

Some criticize the platform operator’s move to provide digital content at cheaper prices for squeezing content owners and creators.

In response, Yoon said that revenue can be generated in different ways.

“Even if we don’t raise the fees, there are other ways to monetize, though it is too early to specify at this stage,” Yoon said.

With the launch of the new service, SK Broadband will also go beyond distributing content by producing exclusive shows in cooperation with JTBC, a broadcasting affiliate of the Korea JoongAng Daily.

SK Broadband is not alone in betting big on mobile video services.

Rival telecom operator LG U+ and global player Netflix are all vying for market share.

Netflix began its service earlier this month, but the modest amount of content and translation issues have been preventing broader appeal.