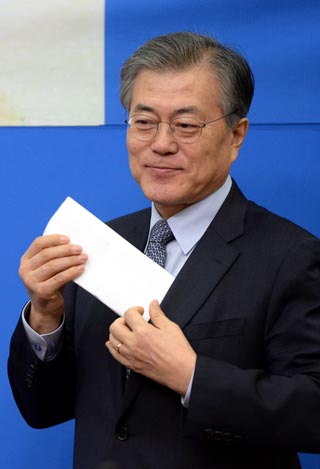 Moon Jae-in plans to step down as chairman of the main opposition Minjoo Party today after the Central Committee of the party appoints Kim Chong-in, who was recruited to head the Minjoo’s general election campaign, as the interim leader.

Moon was elected to lead the main opposition party on Feb. 8, 2015.

Moon has been under mounting pressure from non-mainstream factions after the party lost two rounds of by-elections on April 29 and Oct. 28 in 2015.

“Though I have one more day, I will give you a farewell here because today will be the last chance for me to make public a new talent we recruited,” said Moon in his office on Tuesday. He announced that the party had recruited Kim Byung-ki, former director of the human resources division at the National Intelligence Service.

An aide to Moon said that he would like to take a rest until the Lunar New Year holiday.

Moon told aides he would like to take a rest at a place where no one can contact him after he announced his intention to step down at a press conference on Jan. 19.

Another aide to Moon said, “Chairman Moon does not have any regret about not running for an Assembly seat. It is highly likely he will campaign for Minjoo candidates for the April 13 general election in the Seoul metropolitan area.”

Kim Chong-in, who heads the Minjoo Party’s campaign, said in a radio interview on Tuesday, “I think Moon must work hard to help the Minjoo Party win the general election, though he does not assume any official post.”

Kim added, “We can say we won the election only when we win more than 127 seats.”