Wisdom inherent in the words of our ancestors

Wisdom inherent in the words of our ancestors 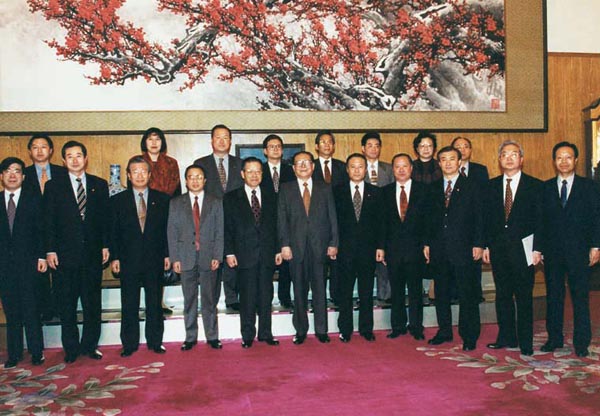 Kim Jong-pil, front row fifth from left, stands next to Chinese President Ziang Zemin during his visit to Beijing on Feb. 11, 1998. The photo was taken after their meeting. [JOONGANG PHOTO]

On Feb. 8, 1998, I visited Beijing at the invitation of the Communist Party of China, 17 days before Kim Dae-jung’s presidential inauguration, where I spoke with a number of senior party members, including Chinese President Ziang Zemin.

The trip came a year after the death of former Chinese leader Deng Xiaoping. In China, I was greeted by President Ziang at his office in Zhongnanhai, the party and the government’s central headquarters.

As I entered the room, I noticed a large painting of an apricot tree, with a four-character idiom written in calligraphy: “A dry tree waits for spring.”

“The idiom written next to the drawing signifies China’s willingness to implement capitalism under a one-party system, right?” I asked. “Was this not the direction China took under the command of the late President Deng Xiaoping?” 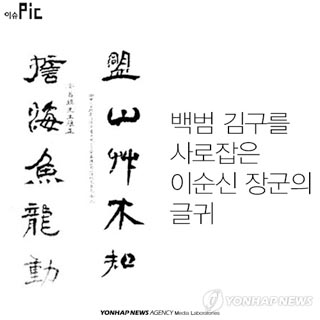 “Of the many guests who have visited my office, you’re the only one who had such insight into the meaning of that idiom,” he said.

Our meeting was initially scheduled for 20 minutes but instead lasted nearly two hours as both of us indulged talking about a variety of issues. He struck me as a man with great pride and confidence, as well as a powerful voice.

I delivered the Chinese leader a hand-written letter from Korea’s president-elect and explained Kim’s vision for stability in Northeast Asia, to which Ziang responded positively.

Looking back, our first encounter went well thanks to that painting.

The appeal of calligraphic artwork is that the viewer can communicate with the artist. I have accumulated numerous works over the past 50 years and I continue to find them to be a source of inspiration and motivation.

One piece I value highly is a poem by Admiral Yi Sun-shin, who saved Korea from the hands of Japanese invaders in the late 16th century.

Yi’s lasting legacy, engraved on the white paper that I have in my home, can be interpreted as follows: “As I make an oath of ever-lasting fidelity to the nation to the God of the Sea, the waves begin to ripple impressed by the avowal. As I make the same avowal to the mountains, the trees also are impressed by such fidelity.”

I can sense Yi’s unwavering determination to defend the nation in these lines, as well as the loneliness inherent in fulfilling a mission nobody but him could have accomplished.

During the turbulent years following the country’s liberation from Japanese colonial rule, Syngman Rhee, South Korea’s first president, and independence fighter Kim Gu found inspiration in Yi’s words. While the two men differed in their political philosophies and vision for the country, I’m sure they both shared a common desire to better the country.

It was former President Park Chung Hee who took the lead in commemorating and remembering the legacies of Admiral Yi. When he and U.S. President Jimmy Carter stood at odds over whether to withdraw U.S. troops from the Korean Peninsula, Park often cited how Yi had safeguarded the nation from external security threats.

Next to Yi’s work, I used to have a drawing of orchids by Yi Ha-eung, who ruled the nation as regent between 1863 and 1873. He is remembered for the reforms he pursued as well as his strict isolation policy and his persecution of Christians.

Yi spent his later years in isolation after he was driven out of power by his daughter-in-law, the Empress Myeongseong. When I look at his paintings, I can feel his disappointment in failing to revive the Joseon Dynasty. The curved leaf in one drawing seems to signify his willingness to back down in the face of a grim reality.

Next to the drawings, Yi wrote that he drew the orchids not to represent the people who enjoyed wealth and prestige, but for the people who anguished over the state of their lives. I feel as though it is Yi’s attempt to calm his mind following a bitter defeat in the struggle for power.

The works by Admiral Yi and the Joseon regent were confiscated when military forces under the command of Chun Do Hwan raided my home and took me to be interrogated. Thirty-five years have passed since that day, and I have always hoped that I could be reunited with those works.

Another calligraphic work I deeply value is that of a four-character idiom gifted to me by two-time lawmaker Park Hyun-sook. I held a deep respect for her, as though she were my own mother. A renowned independence activist during the Japanese colonial period, she looked after younger lawmakers like they were her own children. The piece she gave me can be translated as follows: “I do not speak of words; instead I only smile.”

That phrase would not have touched me as deeply had I seen it in my haste to modernize the country directly after our May 26 revolution [coup] in 1961.

But in my later years, in my struggle for power in the political arena, I began to recognize the value and wisdom in the phrase.

Through the works of our ancestors, I was able to learn invaluable life lessons and ease the anger and disappointment I often felt during the course of my 50-year political career.