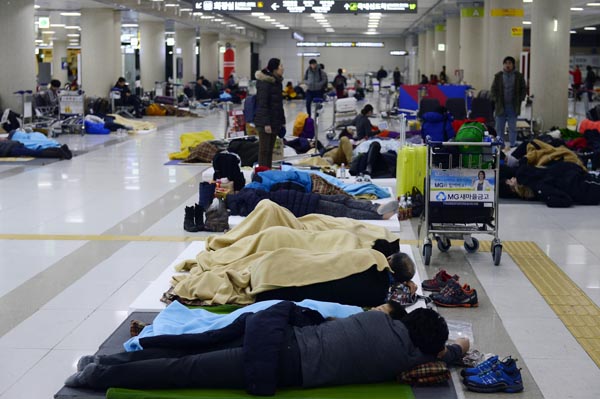 Stranded passengers rest on the floor of the departure terminal at Jeju International Airport on Tuesday. [JEON MIN-GYU]

Flights from Jeju International Airport operated around the clock Monday and Tuesday to return nearly 60,000 stranded passengers back home; however, about 12,000 travelers remain stuck after snow forced the airport to close and ferries to stop running.

A blizzard over the weekend halted movement on the southern resort island of Jeju until Monday afternoon, and the exodus of stranded passengers is expected to continue until today at the earliest or tomorrow at the latest ? at least for travelers flying to the capital region.

Travelers seeking to board planes bound for smaller hubs, such as the airport in Cheongju, North Chungcheong, have struggled to secure tickets, while some have considered taking the long way home.

“It’s upsetting that I can’t leave until Saturday,” lamented one stranded traveler, surnamed Choi, 48, whose waiting number was 300. “I think it’ll be faster to take a plane bound for Gimpo, or take a ferry.”

According to the Korea Airports Corporation, more than 30,000 travelers left Jeju between Monday afternoon and early Tuesday; 238 flights are scheduled to depart Jeju on Tuesday with 30,000 passengers.

Among the 238 flights Tuesday, only about 20 extra flights, with a 4,000-seat capacity, were scheduled to help transport stranded passengers.

On Monday, the Ministry of Land, Infrastructure, and Transport temporarily lifted a ban on flights between 11 p.m. and 6 a.m. at airports in Gimpo and Gimhae, South Gyeongsang, which serves Busan, to carry out 70,000 travelers stuck in Jeju.

The Korea Meteorological Administration said 12 centimeters (4.7 inches) of snow fell Saturday in Jeju City, its biggest blizzard since 1984, when it saw 13.9 centimeters of snowfall.

More than a meter of snow fell on Mount Halla, the country’s highest mountain and one of Jeju’s most favored tourist spots.

The airport’s runway was shut down at 5:50 p.m. Saturday for 42 hours, and more than 800 flights to and from the island were canceled.