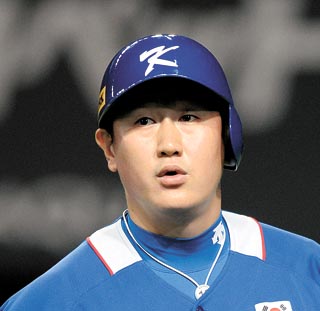 The clock is ticking for free agent batter Lee Dae-ho to sign a contract with a Major League Baseball team.

After becoming a free agent from Japanese club Fukuoka SoftBank Hawks, Lee left Korea on Dec. 4 to join the training camp for his former Korea Baseball Organization (KBO) club, the Lotte Giants, in Arizona. He is scheduled to return to Korea on Friday.

While training for the upcoming season, the 33-year-old slugger has also been gunning for a deal with an MLB team through his agencies, Montis Sports Management Group in Korea and MVP Sports Group in the United States.

There has been speculation that Lee might ink a deal with an MLB club this month. The 33-year-old was the only Korean free agent to attend the annual MLB Winter Meetings last month in Nashville, Tennessee, and when he touched down in Korea afterwards, Lee said he’d met with the general managers from four MLB clubs and expected “good news” in January.

But with only about week left in the month, his options are getting limited.

The MLB winter transfer market is about to close, and as most teams’ spring camps start from the middle of February, other top-rated free agents who can play Lee’s positions ? first base or designated hitter ? have already found new clubs.

Japanese media previously reported that the Hawks have given Lee until this week to decide whether he wants to return to them for his third season. The Hawks will start spring training next week, but Japanese newspaper Sports Hochi recently reported that Sadaharu Oh, the chairman of the Hawks, said the team can wait until February to begin.

Lee is coming off a big season in the Nippon Professional Baseball, winning the Japan Series MVP after leading the Hawks to defend their title. Nicknamed “Big Boy” for his impressive frame - 194 centimeters tall and tipping the scale at 130 kilograms - Lee had 225 home runs in 1,150 games in Korea and delivered 98 home runs in 570 games in Japan.

Analysts said MLB teams may be still sizing up Lee’s talents in defense and running.

“There is no doubt that Lee is hard hitter,” said MBC Sports Plus analyst Song Jae-woo. “Although, the MLB should have different view of Lee than before, this doesn’t mean Lee has proven himself as a player, especially in defense and running.

Lee, who is the 2010 KBO MVP and three-time batting champion in Korea, received 400 million yen ($3.4 million) from the Hawks last year, and if he re-signs, the Japanese club reportedly offered to increase his salary to 500 million yen.

Song said the amount of money Lee has received, or is being offered, in Japan may be making it more difficult for the player to negotiate an MLB contract.

“The key for reaching a deal will be how much Lee is willing to lower his standards,” Song said. “Lee hasn’t specifically said how much he wants, but I think he has minimum standards like contracted years. I don’t think that MLB clubs are willing to accept all of Lee’s terms.”